As hurricanes go, Humberto is a flash in the pan. He showed up unannounced, sneaked onto the Louisiana coast and then just kind of chilled. 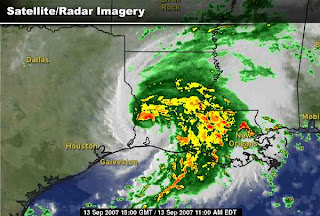 In Louisiana, we get excited about hurricanes, although Katrina and Rita two years ago changed our almost recreational view of them. As an example of pre-Katrina disregard for the destructive and disruptive potential of these storms, perhaps the most famous tourist-targeted drink in New Orleans is the hurricane. People buy souvenir glasses to prove they consumed one. Presumably, these potent concoctions help one cope with the stress of riding out a storm. Either that, or they cause your head to swirl at hurricane force. You get the idea.
So, we find ourselves kind of pulling for hurricanes to move up in rank. Humberto will be imminently forgettable because he barely achieved Category 1 status, the low minors in hurricane hierarchy.
In this part of the state, we are like the little cousin who gets left out of the birthday party. So, when a hurricane hits and we hear we might get tropical storm force winds or large amounts of rain, we sing Pat Benatar songs. "We Belong!"
Alas, Humberto has passed us by. Lake Charles, Lafayette, Alexandria, even Natchitoches are being impacted by Humberto. Sadly, so is New Orleans. Here in the northwest corner of the state, we have a few grey clouds....just enough to be a metaphor.
We're not even on the maps the national forecasters are using to chart the storm's projected path. Left out again, but this time we're happy about it.