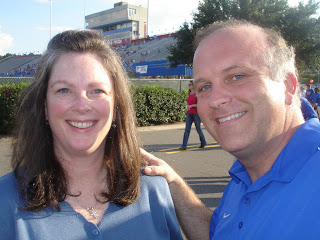 (Ruston, LA)- We had a great plan, but the Louisiana Tech football team wrecked it for us. We are happy they did. We wanted to come to Ruston to see Heisman Trophy hopeful Colt Brennan, the University of Hawaii quarterback. The idea was to watch Brennan pick apart Tech's defense until halftime, then hop in the car and get home in time for a late dinner and to watch LSU's Top Ten showndown with Virginia Tech in High Def.
The thing is, the Tech Bulldogs did not oblige us. 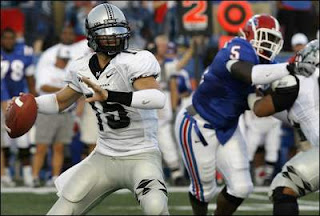 Brennan was good; and it is easy to see why he is expected to be a first round NFL draft pick next year. Tech was good, too. In fact, instead of leaving about 7:30 as expected, we stayed until well after 10:00. The game went into overtime. Hawaii scored a touchdown in the extra time, but Tech responded in kind. Bulldogs coach Derek Dooley decided to try for two points and a win instead of kicking for a tie that would extend overtime. They didn't make it and lost by a point. That decision will be debated for a while, but it was a heck of a football game. It was, in fact, decidedly better than LSU's ridiculous 48-7 pounding of the Hokies a few hours south of here. So, the football gods smiled on our decision tonight.
The experience was slightly unusual for my wife and me because we were in a group of people from work. Among them were three people well above us on the food chain, including the man who is second in command on the company organizational chart. We all behaved as football fans, although I admit to thinking about it a little longer than I usually would before I posed for yet another goofy fan photo. 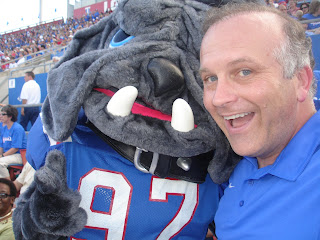 My wife demanded it. I've been so proud of my picture with Mike the Tiger that she figured that Champ the Bulldog needed equal time. Fair enough. It's too bad his team lost the game, though.
Now, I'll go watch the LSU game on TiVo and my weekend will be complete. That is, until the Cowboys open the season against the Giants in prime time.