It's All About the Gumbo

(New Orleans)- I had not been in New Orleans since the LSU football team wrapped up a national championship with a Sugar Bowl win over the Oklahoma Sooners. I was still working in television and I co-anchored a series of broadcasts from just outside the Superdome. That was two years before the dome and most of the city became a symbols of despair following Hurricane Katrina.

This trip involved football, too. LSU and Tulane were playing. Much of the money raised has been earmarked for Katrina relief.
A trip to the Crescent City is not complete without sampling some kind of rich food.

I was staying at a hotel in the Garden District, so I thought I'd stick around that part of town. There's a new place on St. Charles Avenue open in the building which before the hurricane was home to a Houston's, a chain restaurant. It's called Gulfstream, and I was under dressed for it. There was a jazz ensemble playing, so I went to the bar for a drink and an appetizer. Everything there was first class and I may go back when I've packed some long pants. This was a football trip, though.

I had one night in New Orleans and I had already had a Mexican beer and a Cuban cocktail, so it occurred to me that I had better move into the correct culinary region. Also, it was gettng late and there were some pretty compelling football games on television. So, I went into default mechanism.
Almost all of my New Orleans trips have been sports media related, and there's one spot on St. Charles where north Louisiana media members are known to congregate. This night was no exception. At the St. Charles Tavern it was easy to spot a big bowl of gumbo, a plate of redfish and my old buddy Fletcher, who covered the game for KTBS. 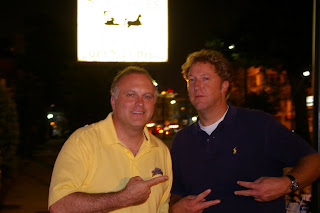 Gang signs notwithstanding, it was a satisfying way to bring an end to a long football Saturday. 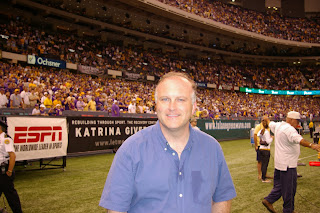