The Entertainment Taxi to Big D. 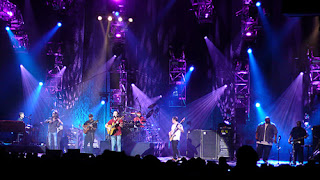 (Dallas) - Another carload of girls made its way to Dallas for a concert, and the parents certainly did not trust them to go on their own. So, guess who drove? There were several parents there, actually. Who knew the Dave Matthews Band was such an attraction? This outing took on a life of its own at my daughter's school. Hundreds of Shreveport high school kids went west for the show. I recongnized several exhausted looking parents hanging around after the show. I spoke to just one who actually attended. She said she enjoyed herself, even though she sat alone.
I dropped my crew off and strapped in for an evening of college football on TV. When I got back to the arena, the concert was in full swing. I waltzed in like I knew what I was doing and nobody bothered me. I grabbed a spot in some empty prime seats and caught about four songs. Then, the people who actually bought the seats showed up and I got kicked out by a lady security guard. I found festival seating and hung around for the encore.
As long as we were in the Big City, we had to take advantage of the shopping opportunities.
On the way home, somewhere in Van Zandt County, we stopped briefly and saw this unfortunate sign. 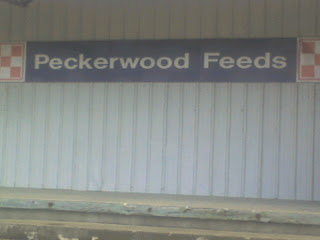 I guess there are plenty of people who find this funny, but I'm thinking they haven't looked up what the word means. Go ahead. I'm not laughing.
I'm worn out. Taking responsibility for other people's daughters is not something that should be accepted lightly, especially when the plans include spending an afternoon in a high-end mall. There weren't many peckerwoods there.

The only time I have ever heard the word used was by Coach Cicero of Jesuit/Loyola fame. While he calls most people "Champ" and therefore doesn't have to remember their names, he often will refer to people as 'peckerwood'. I don't really think he means anything by it, though.

I remember Coach Cicero syaing that, too. In the 70's a lot of people said and did a lot of things that would shock some people today.
Saying it casually and on occasion is also significantly different from intentionally naming a business and permanently posting a sign.
I was cranky on the trip, anyway.