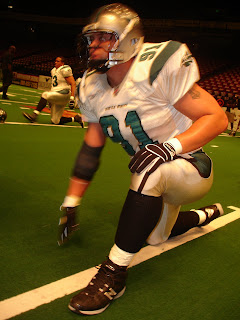 (Birmingham, AL)- Quincy Carter didn't travel to Birmingham with his Bossier-Shreveport Battle Wings for Friday night's af2 game against the Alabama Steeldogs and things worked out just fine.
Backup quarterback Gary Cooper filled in nicely once again - throwing for 227 yards and five touchdowns - and the Battle Wings defense chipped in with a key score as Bossier-Shreveport walked away with a 49-32 victory in front of an announced crowd of 5,612.
Cooper, who became the starter when Carter was suspended for missing team meetings, improved to 3-1 as starter and helped his team improve to 8-2.
He was 14-of-24 with no interceptions and had touchdown passes of 37, 10, 13, 42 and 35 yards.
Steeldogs quarterback Mitch Tanney didn't have much of an opportunity to counter. Tanney was sacked just twice but he was seemingly hurried and hit on every play.
Perhaps the biggest defensive play of the night came after one of Tanney's completions. He found Markeith Cooper along the sideline for a short gain with just over five minutes left in the first half. It appeared that Cooper was out of bounds when Battle Wings defensive back Chris Ibezam popped the ball loose into the hands of teammate Marc Bacote, who carried the ball 13 yards into the end zone. The officials ruled that the ball was live and Bacote's touchdown turned a 21-10 Battle Wings lead into a 28-10 advantage.
Ibezam led all defensive players with 10.5 total tackles, one pass defended and the forced fumble. "Most of the credit goes to the defensive line, because they kept up pressure all night," Ibezam said. "It was a mechanism working together on defense tonight. We're gonna savor this victory, then get ready for Corpus Christi on Monday."
Selesky said that was a big swing in points.
The Battle Wings forced the Steeldogs to attempt to dig out of a big hole. They did close the score to 28-17 on a 1-yard run by Tanney and conversion kick by Nick Hayes with 16 seconds left in the first half.
The Steeldogs took the second half kickoff and drove deep into Battle Wings territory. But the drive stalled at the 4-yard line and Hayes' 20-yard field goal trimmed the deficit to 28-20.
The Steeldogs opted to try an onside kick at that point and the Battle Wings recovered on the 4-yard line. A penalty moved the Battle Wings back but Cooper was able to find P.J. Winston for a 13-yard touchdown on third down.
Two long touchdown passes by Gary Cooper on successive possessions midway through the fourth quarter cemented the victory.
Cooper found former Louisiana Tech standout Tramissian Davis for a 42-yard score, when the Steeldogs defender fell down. After a defensive stop inside the 10, Cooper hit Jamaal Perry on a diving, 41-yard score to give the Battle Wings a 23-point lead.