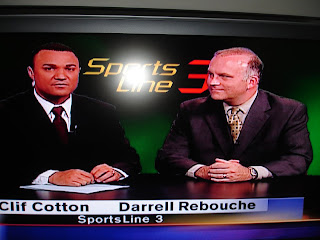 I was invited to be a guest on SportsLine 3, a made-for-local-cable sports talk show produced by KTBS. At first, I thought I might a substitue co-host, since Tim Fletcher was not working. I felt like a co-host. I was sitting at the anchor desk with Clif Cotton, but clearly I was a guest. Clif interviewed me for a half-hour. It was the first time I had been on live TV in two years, but I felt confident and comfortable. The reflexes kicked in. After all, talking about sports on local TV is how I earned a paycheck for 25 years. I guess the skill set, while dormant, doesn't completely disappear. 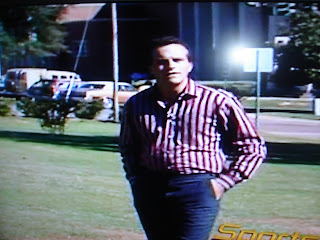 Clif reminded everyone how long I had been around by breaking out some video from 1984 and showing it. I had a lot more hair and significantly less waistline in those days, but I still have that shirt! I remember buying it at the galleria in Houston.
Clif gave me a nice compliment. He said he had run across several pieces of video I had produced during my four-year stay at KTBS in the early 80's. He said the stories are pretty good. That and 95 cents will get me a Diet Coke in the Willis-Knighton cafeteria, but it was nice to hear.
I had fun and I hope they ask me back. The last couple of weeks having taken me on a strange trip down memory lane. Is something cosmic going on here, or is it all just a coincidence that my past keeps unexpectedly popping up? I'm starting to worry a little. What's next to come 'round the bend?

No, actually. It was kind of like eating your mother's cooking. You like it. You miss it sometimes; but, man are you glad you moved out of the house! Every once in a while you like to taste it again. Does that make sense?