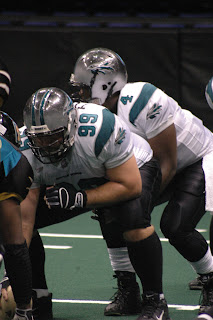 (Houston, June 2 2007) – The Bossier – Shreveport BattleWings dominated the Texas Copperheads on both sides of the ball and came away with a 64-21 win, earning a season sweep of a division foe along the way. Earlier this season, the Battlewings beat Texas in Bossier City 52-0.
Quarterback Gary Cooper, starting for the third consecutive week, threw six touchdown passes, three to Manwell Talbert and two to PJ Winston to lead the Wings to victory.
Defensively, Bossier – Shreveport recorded seven quarterback sacks and intercepted two Kenton Evans passes. Kendrick Bournes, in his first game back after an extended stint on the injured reserve list, recovered a Texas fumble in the end zone for a second quarter score.
The Battlewings led 21-7 at the end of the first quarter. Cooper tossed touchdowns to Winston and Talbert and ran for another score in the first. Both touchdown tosses were set up by interceptions, one by Kenneth Williams and another by Phillip Geiggar.
Talbert and Winston caught touchdown passes in the second quarter. Winston streaked down the left side of the field and Cooper hit him in stride for a dramatic 45 yard score that put the game away. The BattleWings led 41-7 at the half.
Jason Schule added a one-yard run for a score in the third, and Cooper hit Marc Bacote in the end zone for another touchdown. Bacote wrestled the ball away from a defender as he fell backward into the end zone. The resulting touchdown gave the Battlewings a 55-14 lead. Brian Hazelwood added a 38-ayrd 4th quarter field goal. The offensive explosion wrapped up with Cooper finding Talbert on a ten-yard touchdown pass with three minutes remaining in the game.
Cooper was named the offensive player of the game. Defensive honors went to linebacker Marvin Byrdsong. Jarrod Filler of the Copperheads, who scored two touchdowns on six catches and had 113 return yards for Texas, was named Iron Man of the game.
The BattleWings, who improve to 7-2 in 2007, will play the Alabama Steeldogs in Birmingham Friday night before coming home to face the Corpus Christi Sharks on June 16th.