As the father of teenagers, I try to stay on top of the temptations and dangers which confront them. As a long-time media professional, a consumer of pop culture and someone who generally tries to pay attention, I figured to be well plugged in.
Of course, I am naive.
My daughter is making final preparations for a Big Adventure this summer, and we have been going over prohibitions. One of the activities the Big Adventure's organizers have placed on the forbidden list is visiting hookah lounges.
Do what, Jed? If you say it out loud, it sounds like something from The Sopranos. When the girls at the Bing need a break, they retire to the Hookah Lounge. Well, that's not it. What the hell is a hookah lounge? I'm glad somebody had the forethought to keep her out of there, whatever it is. 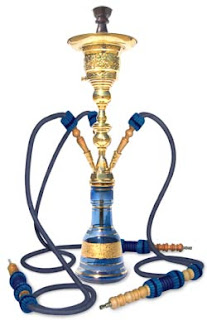 Here's a hookah. Who knew? I guess in the big cities and near college campuses, people are going to these places and communally smoking God knows what. In my day, that was called a bong. But, no! This isn't necessarily for the delivering smoke of the Evil Weed. Hookah propagandists will tell you that visiting bars and restaurants where hookahs lurk on the tables is a chic way to embrace multiculturalism. Apparently, Islamic decor and Indian or Asian music are often part of the hookah experience.
In places where smoking tobacco in public places is against the law, the hookah people are using "tobacco-free herbal alternatives." Ah. So, it IS a bong.
Either way, keep my daughter away from it.

Don't fear the Hookah Bar. I've been in a few around the US, and all they're smoking in there is stuff like strawberry- or mango-infused tobacco. In all my visits, I never got any whiff of the "Whacky Tobackey." As you can imagine, the cops are pretty good at making sure of such. To be honest, it was kind of a neat experience. Your daughter is safer at a Hookah lounge than she'd be at lots of "clubs" these days. Trust me.