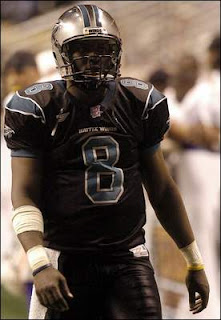 (Amarillo, TX) – The Bossier – Shreveport BattleWings could not capitalize on seven touchdowns generated by quarterback Quincy Carter and lost on the road to the Amarillo Dusters, 51-48. Carter threw six touchdown passes and ran for another score, but it was his failure to find the end zone on a fourth and goal late in the contest that turned the game in the Dusters’ favor. The BattleWings were leading 41-37 in the fourth quarter and were threatening to score again. The Duster defense stopped the BattleWings three times. Then, from inside the one yard line, Carter attempted to leap over a pile of players into the end zone. The officials ruled he was stopped short of the goal line, and the ball was turned over to Amarillo on downs. Carter protested vehemently and was flagged for two unsportsmanlike conduct penalties.
The Dusters, instead of having the ball inside their one yard line, started at the 21. Three plays later, Amarillo quarterback Steve Panella ran the ball in for a touchdown which gave the Dusters their first lead of the ball game, 44-41. The BattleWings could not recover Panella accounted for seven touchdowns, running for four and passing for three more as the Dusters improve to 3-9 while the BattleWings fall to 9-3.
A bright spot for Bossier-Shreveport was the play of Former Louisiana Tech wide receiver Tramissian Davis, who was playing in place of the injured Jamaal Perry. Davis caught seven passes for 150 yards and three touchdowns.
The BattleWings have two regular season home games remaining: July 7 against the Arkansas Twisters and July 14th against Rio Grande Valley.