Tagging Along With The Happy Couple

(Arlington, TX)- The Happy Couple went to Six Flags and we had to go along. My son and his long-standing love interest are 17 years old, staring into the abyss of adulthood while secretly clinging to some of their childlike ways. 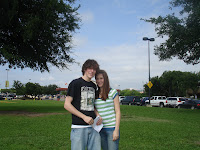 This tightrope act led to a desire to visit a giant amusement park with a limited amount of parental involvement. That meant we agreed to drop them off for a day, which meant we had to find something to do.
Fortunately, the Metroplex is a big place.

After foraging about for food, we made our way back to Dallas for a matinee of Monty Python's Spamalot at the Music Hall at Fair Park. This is the show that won a Tony Award for best musical in 2005, and I can see why. It was big. It was bold. It was snot-slinging funny. We had a great time. 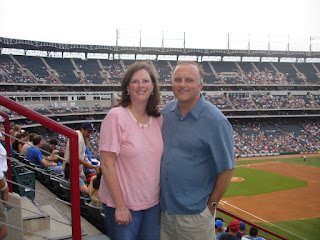 The Happy Couple was having too much fun to leave, so my wife and I caught a movie.
Later, they wanted to stay at the park after sunset, so we indulged them. Fortunately, the Texas Rangers were at home against the Houston Astros. I saw my first interleague game. I got to see Sammy Sosa swing the bat a few times. Just last week, he became only the 7th batter in big league history to hit 600 or more home runs, but he had a quiet night while we were in attendance. The big news for us was Craig Biggio of the Astros, who had three hits in the game to reach 2996 in his career. This week, he should join the venerated 3000-hit club, so we feel as though we saw something special.
It was a rare night in Texas. Temperatures were in the 80's and humidity was in the 50's, so we were comfortable. 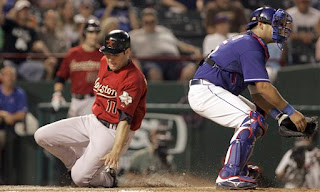 (Lance Berkman scores for Houston)
Finally, the Happy Couple had had enough. We plucked them from the park at 10:20pm and then faced a three-and-a-half hour drive home on a Sunday with work the next day staring us eyeball to eyeball. The alarm rang awfully early this morning.
It wasn't the most desirable cirmumstance, but now that the workday is done and everyone is safe at home, I'd say it was worth it. We spent a weekend out of town with one of our teenagers and everybody was happy. It was indeed a rare night in Texas.

Darrell- it's about time all that Python stuff from high school came back 'round!!! Glad you thought it was as hilarious as I did!!!! Cheers- E

First off, I love pretty much all things Python.

Second, your post brings back memories for me. Dallas was the place I would run away to about twice a month when I lived in Texarkana. With all the city has to offer, I could almost forget that I lived in the City That's Twice as Nice.

Spamalot is still guy-centered. The men in the audience clearly were enjoying it more than the women. It didn't hurt that the chorus girls were spectacular.
We had grat seats...row E (five rows from the stage) on the aisle.
You're right about Dallas. It's the nearest big city. If you do a little research, you can have a decent weekend there.

But the funny thing is all those DFW folks that stream over here for a decent weekend...

You're right, of course, Katherine. Not long ago, my wife and I did a spur of the moment "Dallas weekend." We had no specific plans. We asked the bellman if there was anything going on in town we should be sure to do. He said "There's not much going on in Dallas. Most people around here go to Shreveport for fun."
We just laughed and walked aways.