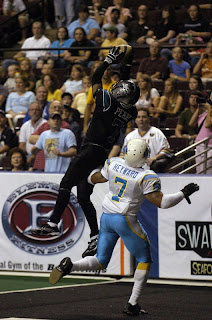 (Bossier City, LA) – Quarterback Quincy Carter made a convincing return to the Bossier-Shreveport line-up, throwing a franchise record eight touchdown passes to lead the BattleWings to an 81-35 win over the Corpus Christi Sharks. Carter, who had missed four consecutive games, completed 16 of 26 passes for 296 yards. He left the game in the fourth quarter to a rousing ovation. Gary Cooper, who started four games in Carter’s absence, led the Wings to a touchdown on the one possession he played, capping it off with a scoring toss to Manwell Talbert. Talbert had three touchdown catches on the night, as did Jamaal Perry and P.J. Winston.
Corpus Christi led once in the game, 7-6 in the first quarter.
Carter led the Battlewings to touchdowns on every first half possession. At halftime, Bossier-Shreveport led 45-14. Jason Schule, who leads af2 in rushing touchdowns, ran for one score. Chris Ibezam had a fumble recovery for a touchdown on a Corpus Christi kick-off return. Marvin Byrdsong also scored when he hit Sharks quarterback John De Los Santos on a pass attempt, forced a fumble, then picked up the ball and scampered 26 yards for the final touchdown of the night. The 81 points scored is the second-most in franchise history, topped only by an 82-point performance in 2001.
Carter was named offensive player of the game. Defensive honors went to defensive end Elex Reed, who added to his league-leading sack total by getting to De Los Santos once in the game. Reed also recovered a fumble.
The BattleWings improve to 9-2 on the season, while Corpus Christi falls to 1-9.