I think there is a strong indication that I have become officially old. Four of the last five meals, I have spilled something on myself. Yesterday, at lunch, my wife had made a couple of nice big salads. You'd think eating a salad at mid-day would be safe, but no. A hunk of lettuce, generously slathered in ranch dressing, fell off my fork and right onto my shirt. Later, during the same meal, a crouton did me in. I had to change clothes.
Fast forward to dinner time. The family went out for Italian. I thought the meal was incident-free, until we were walking out. Then my daughter said, "Hey dad you've got a little schmutz there on your shirt." Schmutz? It looked like spaghetti sauce to me. Who knows? Quick, somebody pass the matza.
Twice today, I spilled milk. At home, eating a bowl of cereal before work, I dropped some on my shoe. I got milk with my lunch at the cafeteria. Again, I thought I made it through; but when I got up to leave there was milk on my tie. I'll stock up on Scotchguard and bibs and just hope for the best.
Leftovers from the road:
During my unanticipated fasting period in Birmingham, I finally found my way to a Hardee's near the airport. 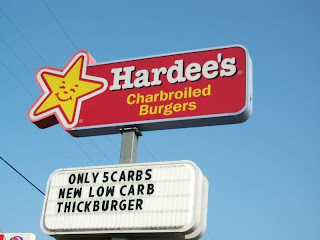 There was a problem, of course. I got there about 10:25 am. That's the time to transition between breakfast and lunch, and to heck with those pesky customers. The shift manager was doing some kind of paper work. somebody else was "rotating the menu" and another guy was filling napkin dispensers. I finally got Napkin Guy's attention and asked him to please just give me whatever's on the shelf. I settled for some kind of mega-biscuit. I had to ask for a napkin, ironically, and then for a drink cup. Once I sat down to eat, they just kept on ignoring people. Finally, this poor guy driving a delivery van (You know the time pressure they're under) just snapped. He said, loudly, "For God's sake! Can't I just get something to eat?!" That finally got their attention.
I wonder if he spilled anything on himself along the way.