(Greensboro, NC)- There is life in Greensboro, after all. You just have to stay up late to see it. We started Friday evening at a restaurant called Ham's, which apparently is a local chain. The place we visited is across the street from the hotel, so there was no thinking involved. It's in the Applebee's/ Chili's vein, so it served us well as a venue to watch games on TV. 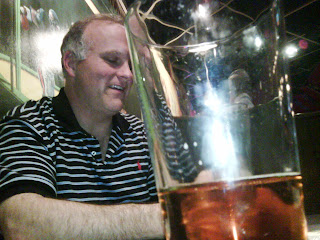 The traveling companion and I are by far the oldest people in our pack of Louisiana media types, so the young folks herded us out onto the road. First was an obligatory stop at Hooters, which was two doors down from Ham's. I mean, can you go to a sporting event in any town in America in a group of guys and not stop at Hooters? I don't think so.
Then, it was back downtown where thankfully we passed by the legendary Natty Greene's and wound up at a nightclub called Stumble Stilksins. 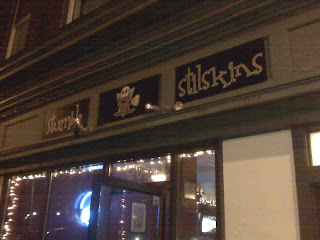 It was a great setting to watch basketball. It was not a great setting for two married guys in their forties to fit in. The place was a magnet for the city's young and beautiful. They were doing what the young people do on a Friday night. It was fascinating to watch until I realized rather quickly that I was literally old enough to be everyone's father. I just tried to slink back into a corner and wait for a ride back to the hotel.
It was nice to see the nightlife, though. I don't do that very often. Even if I had been inclined to misbehave a little (which I wasn't), the sobering fact that just about everyone has a camera/ video camera/ cell phone in their pocket is quite inhibiting.
So, It's off to bed and back to the business of basketball on Saturday.