(Greensboro, NC) - Now, this is harsh. A media member this morning described this city as "the butt crack of the universe." That's just not nice, but it says a little bit about the mood around the Greensboro Coliseum on the day between games.
Players and coaches from LSU, North Carolina, Texas and Duke are meeting the media. Our focus, of course, is on the Tigers and their next opponent. The LSU players are in an upbeat mood. Some might say it's because they have nothing to lose. 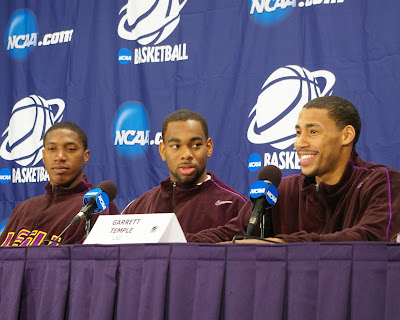 Maybe it's because they're confident as they prepare to play the #1 seeded Tar Heels. Conversely, the Carolina players seem businesslike while their coach runs a comedy riff from the podium.

I have to say I've been impressed with My Main Man Tim, who has proven to be a soundbite generating machine. His questions to LSU plyers in advance of their game against Butler elicited responses about "getting mojo back," and several broadcasters and writers hooked their stories on those quotes.
This morning, he asked the LSU players about their center, 6-10, 205 pound Chris Johnson matching up against All-America Tar Heel center Tyler Hansbrough. 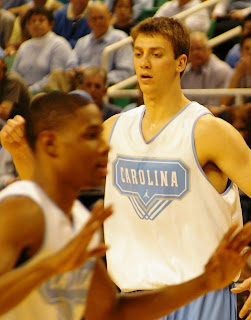 The question had to do with what they've said to Johnson about slowing Hansbrough down. LSU's Marcus Thornton said, "I don't think we should tell Chris anything. If he can't get up for this game, he doesn't need to be playing basketball period. Tyler Hansbrough is one of the greatest players in the conference today. If Chris can't step up to the plate like he needs to, he doesnt' need to be playing." Now, that's a quote to build a story around.
There's more elbow room in the media compound today because four teams have lost and the reporters following them have left. But remember, we're in North Carolina, so the local and statewide media is camped out in force to cover the Tar Heels and the Blue Devils. They're competing with one another, so we visitors from the west are kind of sitting back watching them throw elbows among themselves.
All of the real work for the day should be wrapped up by early evening, which means a free Friday night in Greensboro. I think I'll be grateful for the flat screen TV in my hotel room. After all, here in the anatomically disadvataged region of this state, it's all about the basketball.