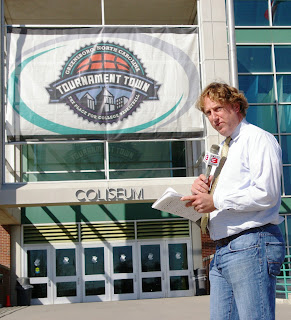 (Greensboro, NC)- I've had the opportunity over the past few days to observe the work of television crews from Louisiana, Texas, North Carolina, South Carolina and Indiana. I'm here to tell you no one is working harder or under more duress than hometown guy Tim Fletcher. He's producing multiple stories for his television stations, providing original web content, and even hosting his two-hour Radio/TV/Web show each morning. He's working an insane pace and is doing so while sleep deprived, hungry and hurt.
I have watched him sustain himself on one real meal a day with an occasional Kit-Kat bar to help him power through. His work ethic and desire to get the most out of himself are something to behold, even though I've been witnessing this first-hand for almost a decade and a half.
Now, he's debilitated by some kind of hip malady which has left him with an obvious limp. He's been in so much discomfort that he's had trouble sleeping. I've been calling friends in healthcare for a few pointers. He was given some advice about stretching and he's been a somewhat compliant patient when he can find the time. We are told his symptoms are consistent with an ailment common to long-haul truckers. Aleve, Advil and Capzasin have him going...but not going strong.
Tomorrow, he faces a fifteen-hour drive home. Trust me, only a well deserved rest can put Humpty Fletchy back together again. But knowing him as I do, I suspect he won't take one.