(Greensboro, NC) - We're less than a half-hour from the start of the NCAA basketball tournament, and the energy is picking up here in beautiful Greensboro. We had the opportunity to watch the LSU and Butler teams warm up on the court, but no photos were allowed. This is interesting, because there were fans in the stands firing away with their digital cameras. Go figure. You want to follow the rules, though, because who wants to get kicked out? 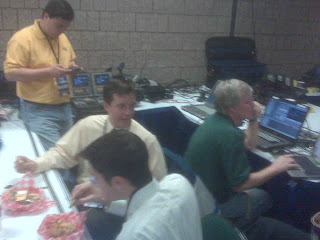 In the bowels of the coliseum where the media are forced to dwell, folks are getting a little cranky. There's no food available. Before you break out the tiny violins, keep in mind that everybody's working, they're stuck outside the arena in a cinderblock fortress and there's nowhere to go.
A reporter from Baton Rouge took the bold move of going into the arena to buy some "chicken fingers" at a concession stand. How daring. Soon, the basketball will begin and all of this hunger-induced angst will be forgotten.