If I didn't already have a MasterCard, I'd go get one because I love the latest commercial so much. How did they do it? I don't know. But the idea of a dinner party including The Gorton's fisherman, Count Chocula, The Morton's Salt girl, Charlie the Tuna, Mr. Peanut, The Vlasic stork, and Chef Boyardee is just inspired. Throw in Poppin' Fresh, the Pillsbury doughbhoy walking around on the table, that's just plain funny. And then, the idea that the Jolly Green Giant is so big he can't come in, but waves at everybody through the window...That just floors me. I guess he can't say "Ho Ho Ho" if he leaves the valley. 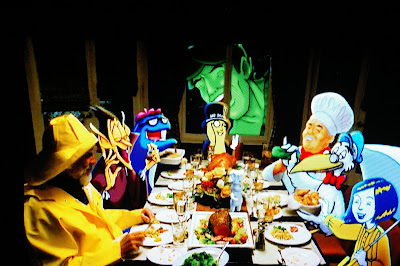 While the MasterCard narrator goes through his list of prices on his way to saying "Getting everybody together for dinner: Priceless," the dinner table conversation goes on.

At one pause in the narration, the Gorton's fisherman (off camera) asks Count Chocula, "How's Frankenberry?" That is so subtle yet so brilliant. I'm just a little disappointed they didn't bring up the lightly-regarded BooBerry.
When dinner is over, Charlie clears the dishes and takes them into the kitchen to discover Mr. Clean in there ready to was them.
I'm not sure what they're serving. Creepily, tuna casserole, I think. Pickles, dinner rolls and meatloaf seem to be on the table. I guess they had peanuts with the drinks, and there was probably some kind of pasta in there (unless the Chef is just a guest, but he has hit hat on!). There has to be some kind of fish. Everything is salty enough, to be sure....even the vegetables from the valley.
If anybody spends the night, they're having chocolaty cereal for breakfast, to be sure. It's a party I wish I had been invited to.