(Greensboro, NC) - Ultimately, North Carolina was just too blue for LSU. The Tigers fought gamely, even storming back to tie their NCAA Tournament second-round game against the top-seeded Tar Heels in the second half. The Heels had too much fire power and pulled away for a 14-point victory.
This trip has been a nice vacation, a brief immersion into the world I inhabited professionally for a quarter-century. As an event, it certainly did not disappoint. The Tigers were involved in two thrilling games, as were the Texas Longhorns. Neither team advanced, but they really weren't expected to get past the second round.
For me, it has been a chance to spend a lot of time with one of my closest friends and witness sports played at a high level.
I got to goof around with my camera a little, although I didn't try too hard. 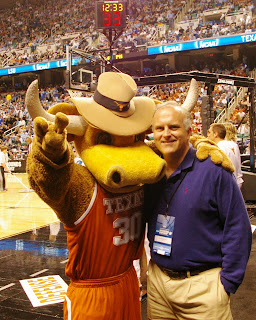 And of course, I couldn't possibly pass up an opportunity to get a photo made with a mascot. I waited until the second half of the last game to even try. It's a nice, appropriate punctuation mark to a remarkable week on the road.

Oh Darrell, As a true T-sip, that picture makes me proud. We are now really friends for life.
Lois Maberry