I DIdn't Get My Nap

This being the first day of Daylight Saving Time in 2009, I planned to nap in the afternoon to offset the "lost hour" of sleep. Instead, I wound up in the Great Outdoors rescuing young pine trees.
A couple of years ago, out on the land, we planted a stand of pine. We have been patiently watching them grow and they've been doing so reliably. It's starting to smell piney out there in the woods.
Some kind of weather phenomenon blew a few of them over. It was intersting to see, because there was a discernable pattern in the fallen saplings. I assume it was weather. It might have been a supernatural force similar to that which forms crop circles in England, but that seems farfetched. 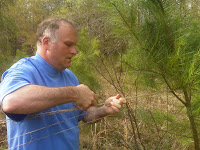 So, instead of sleeping, I spent an afternoon staking trees. My father and I straightened them and strapped 'em up. At one point, it dawned on me that I was using skills I learned long ago: making ropes, tying knots, lashing: Boy Scouts!
Maybe in a few years, we can camp out under those pines. I guess that's when I can catch up on my sleep.