Random Sights From the Regional

(Greensboro, NC)- At a sporting event of this magnitude, you expect to see sports celebrities. Since it was a basketball tournament, there were instantly recognizable faces from the hoops world; but I was caught a little by surprise when University of Texas football coach Mack Brown walked right past me. 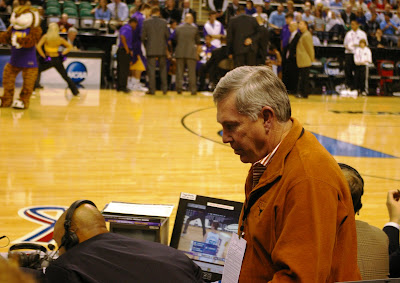 It was impossible not to notice the LSU entourage. In a sea of two shades of blue, Purple and Gold stood out in the crowd. The typical Tiger flair certainly helped. 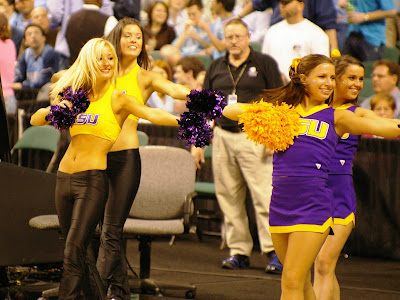 There was some hilarity during the LSU-North Carolina game. The Tiger crowd was small but vocal. They were helped remarkably by the assembled Duke faithful who were sitting on the opposite side of the arena. Duke people hate Carolina so passionately, they became Tiger fans for a couple of hours. They even participated in LSU cheers. The Purple and Gold People would yell "geaux!" and Duke people would responded with "Tigers!" The best part, though, was the response of the Carolina fans, who got fed up and just yelled "Shut up!" 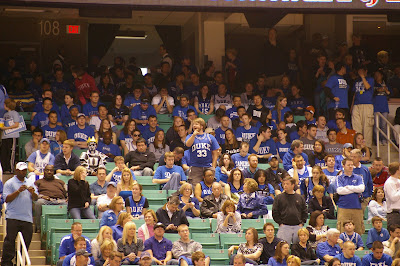 The last word went to the people in the lighter shade of blue, because their Tar Heels won.

Duke got even a little later when the Blue Devils beat Texas. So the state of North Carolina is happy.
I must say that in my travels through the years, I have not encountered a group of arena workers, police and assorted officals who were more friendly, helpful and reasonable. The fine people of Greensboro have hospitality figured out. Despite losses by the two teams we were here to see, the stay has been pleasant with a lot of legitimate fun thrown in as a bonus.
So long, Greensboro. Glad to know you. 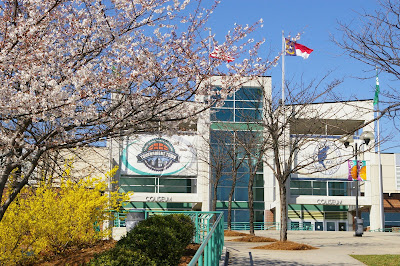