Feeling Two Shades of Blue and a Little Purple

(Greensboro, NC)-Madness, indeed. How else would you describe driving fifteen hours overnight non-stop to watch basketball? That's exactly what my friend Tim and I have done, and so far it seems worth the trouble. The LSU basketball team is here for the NCAA Tournament. 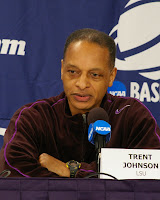 So are the North Carolina Tar Heels, the Duke Blue Devils, the Texas Longhorns, and the Minnesota Golden Gophers. Three other schoools you probably never heard of are represtented here, too. I mean, everbody needs an opponent. All eight teams were in one building today, which means legendary coaches were prowling around. 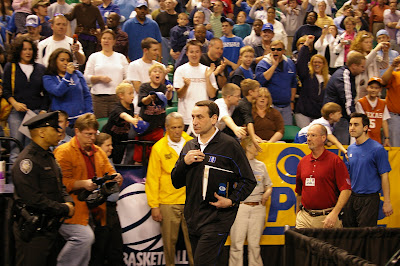 We're here primarily for the Tigers, of course; but LSU is completely overshoawed by Duke and Carolina. Each of those teams attracted more than 5000 fans to the Greensboro Coliseum today for shoot-arounds. A shoot-around isn't really a practice; it's more of an exhibition. The players take to the court wearing shorts and practice jerseys in team colors and basically, well, shoot around. 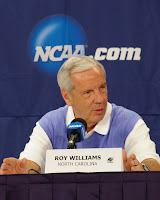 Duke fans and Carolina fans hate each other's teams, so their appearences were well-spaced, with a Texas or a Radford or a Butler thrown somewhere in between. The players barely broke a sweat, but the cheers of their assembled faithful were ear-splitting nonetheless. The most piercing screams were for the Tar Heels' tough-as-nails senior Tyler Hansbrough, who seems to enjoy celebrity status on a level with certain rock stars. 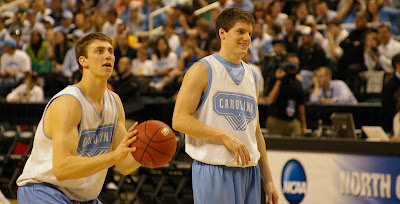 To his credit, after the event he mixed in with the students and fans and signed autographs for an impressively long time.
Things get serious on Thursday with four games in one day in this building. LSU goes first, but we certainly plan to stick around to watch everyone. 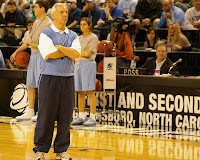 If the Tigers win, they will likely play North Carolina next. That game would be on Saturday. If LSU loses to Butler, we will turn around and drive home Friday morning. Frankly, I hope LSU wins because I'm not looking forward to another fifteen hours on the road. At least pushing it back a couple of days would give us a chance to rest. Geaux Tigers.
-------------------
Tim and I ran into our old friend Dave, who is a sportcaster in Minneapolis these days. He's here to cover the Minnesota Golden Gophers, who play Texas. Hopefully, we'll get a chance to spend down time together. For that to happen, LSU and Minnesota would both need to win. Geaux Geauphers. 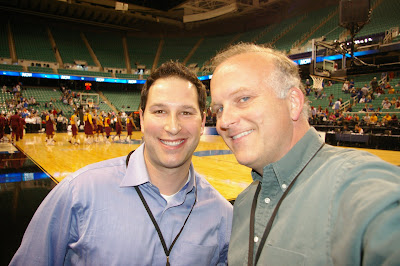 I am one jealous dude. Say hi to Dave for me.