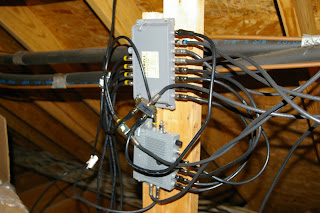 It took a couple of dry runs and an annoying number of phone calls to my technophile buddy, but I figured out this tangle of TV cables in my attic and actually added to it. The idea was to get the best possible "over the air" (OTA) signal to my fancy high definition (HD) TV's.
I am convinced that satellite TV is vastly superior to cable, but sadly satellite providers are not offering local stations in HD on their service. Now, don't go arguing with me that the cable companies do have local HD's, because there's no dispute. Point conceded. I can tell you, though, that a good, strong OTA HD signal is much better than the one provided after the signal is squeezed down and sent across miles and miles of cable. 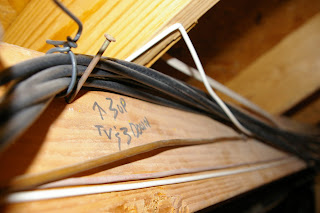 To meet my own HDTV demands, it was necessary to set up a Sattelite/ OTA combo. Thanks to the technophile and no thanks to the satellite installers, I was able to service three HDTV's with one antenna in the attic (with capacity for a fourth.) Awesome awesome awesome. This invloved using six little gizmos calls diplexers, two or three splitters and who knows how many jumpers (short cables), but it's all working fabulously and I have magnificent satellite and OTA High Definition. As a bonus, I'm even picking up some distant OTA signals not offered on the satellite service.
Trying to explain what's over the air and what's coming across the satellite dish to the rest of the family has proven to be a challenge, particularly for the young adults in the house who have never known life without cable or satellite.
All they know is since I moved the antenna from the living room into the attic (diplexers, whatever!), most of their favorite shows are reliably in HD. As long as they know what button to push and which remote control to use, that tangle of cables in the attic is just Dad's problem. 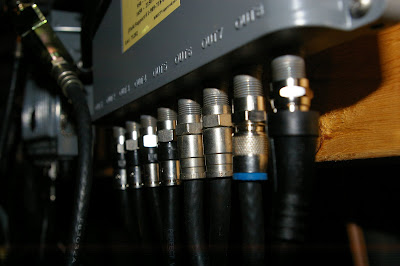 I can appreciate your post. I just recently upgraded my viewing to a 1080 HD Plasma and am sorting through the options as to what my cable service provides. I've noticed that some HD channels via cable are really quite good, so I'm exploring what options they have to offer. ( I'm leaning towards "bundling" phone & broadband as well as TV which can save a few bucks overall.) I will also get an HDTV antennae for OTA.

Despite all the hype and hoopla over "true HD", both satellite & cable compress their signals to a certain degree. I'm hoping that I discover most transmissions to be "true 16:9" so as to avoid stretching / squeezing / cropping the image. That's as annoying as signal noise IMHO.

My biggest interest is Blu-Ray and that's the next step.