(Greensboro, NC) - The LSU Tigers beat Butler in the first round of the NCAA Tournament, and this means we get to hang around Beautiful Downtown Greensboro until Sunday morning.
LSU played well, but their next opponent is North Carolina, widely considered to be the best team in this region and one of the top four teams in the nation. So, we will enjoy the LSU season while it lasts.
As teams lose, the media following them start to clear out. So, there's a little more elbow room around here, even now.

This is good, because close quarters and a lack of food were a sticky combination. A media person from Indianapolis got into a sarcasm match with a guy from New Orleans, which was simultaneously unsettling and amusing.
The cultural contrasts are worth noting. Midwest values versus South Louisiana sensibilities made for some interesting comparisions. The schools' cheer squads were remarkably different. Butler's girls were in traditional shirts and skirts, bascially in black and white. LSU's women were quintessentially golden, complete with skin-tight pants, bare midriffs and sparkle. 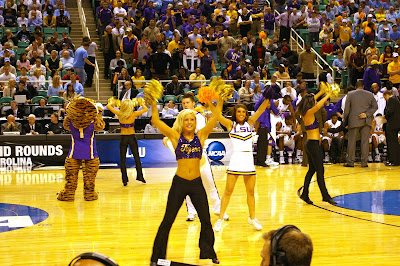 There's nothing to complain about here. We were sitting on the front row at center court, and you can't beat that. Now, the question is: can anybody beat the Tar Heels? 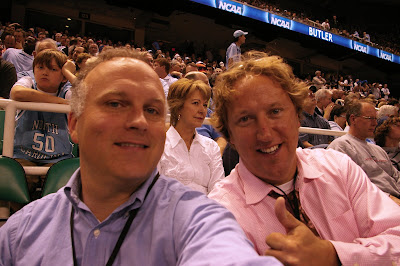 One more "small world" moment: we were sitting there in our center court seats and we noticed a guy nearby who looked really familiar.

We quickly realized it's Rick Hall, who used to be the head coach of the Continental Basketball Association team in Shreveport. He lived in our town in 1995-96. Now, he's an assistant coach at Radford, the team that lost to North Carolina. We got to spend time time with him catching up on his career. You never know who you'll run into on the road.