Whaddaya Know? She DID Sing! 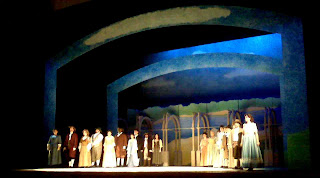 We were graciously given two tickets to tonight's Shreveport Opera event at the Riverview Theater. So, to the culture we went. We enjoyed the evening. It was an excuse to kind of dress up and it got us out of the house. The music was Mozart, and we all know Wolfgang could get it done. Patrons of the arts, particularly our benefactors, may not truly appreciate what I endured.
See, the NCAA Tournament was going on while we were listening to the pretty singing. Villanova and Pittsburgh were engaged in a classic tournament game....one for the ages, I'm told. I wouldn't know. I was at the opera. Oh, and our Arena Football team opened its season tonight with a one-point loss. While I was at the opera.
I might have been oblivious to all of this, except for a combination of modern communications and some abusive friends. My Blackberry was abuzz with text messages and Tweets about the games. Abuse was being heaped upon me. At approximately the same moment there was an on-stage death, I was forced to surrender a chunk of my sports fan credibility as Villanova drove the length of the court to score a game winning basket with five-tenths of a second remaining in the game. I kept my electrnoic correspondents amused by updating Twitter and Facebook from my seats in the orchestra section.
If there is a bright side, it is this: I was able to get absolute confirmation of an enduring truth. The opera is indeed not over until the fat lady sings.