November arrives with little fanfare in north Louisiana. Assuming the temperatures moderate a bit, people are grateful for a break from the heat. It gives sports fans an opportunity to concentrate on what’s really important around here: the stretch run of the college football season, the playoff push for the NFL and the opportunity to throw a rubber crawfish onto a sheet of ice in south Bossier.
Fifteen years ago, who would have thought that minor league hockey would become such a part of our lifestyles that it would be mentioned in the same paragraph with football? But there it is, make no mistake about it. With the success of LSU and the Dallas Cowboys this year, it may take the Mudbugs a few weeks to capture the kind of attention to which they’ve grown accustomed. If they win, it will happen.

You can count on it just like you can expect to see their veteran coach have an attack of apoplexy over a perceived slight by an opponent or a guy in a striped shirt. That seems even more likely now that the team is winless in its first five games. Watching Scott Muscutt get angry is one of the great joys of attending a Mudbugs’ game. He’s a great guy and a successful coach. It’s fantastic that he has a job where so demonstrably venting frustration is considered quite appropriate. Maybe that’s one of the reasons this team has been successful in attracting fans: the flummoxed working man can get a vicarious thrill or a sense of relief just watching Musky work.
This has been a special season for LSU football fans, too. For people in north Louisiana, it has been especially nice because a Shreveport kid has had such a direct impact on the Tigers’ offensive accomplishments. 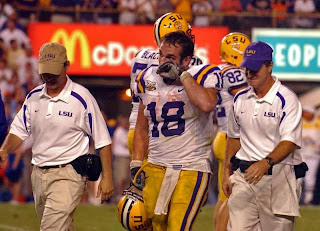 Jacob Hester plays running back, fullback and special teams. He was a true football hero in the win over Florida, a game which many veteran observers believe might have been the most significant game played in Tiger Stadium in a generation. His determination to do whatever it takes to convert a fourth down or to score the game winning touchdown created an enduring LSU legend. As more than one person has said, only slightly kidding, Jacob Hester may go the rest of his life without having to buy a meal in Baton Rouge. He may not make it to the NFL, but his name is tattooed into Tiger lore. He will play out his final season of eligibility this month, and hopefully will put a punctuation mark on a remarkable college career in January.
While the Saints lost their first four games, Cowboys faithful are energized by the emergence of charismatic quarterback Tony Romo, a rising pro football star. November will tell us a lot about how good the Cowboys are. In the NFL, you’re only as good as your most recent playoff game. Still, there’s plenty to smile about for fans of the Silver and Blue.
Once those questions are answered, it will be time to turn attention to the guys on skates. It should be just about the right time for the current version of the Mudbugs to define themselves as a hockey club. There’s a new general manager in the office, but the same coach is on the bench. That means the on-ice attitude so many local fans have learned to love will be firmly in place. Certainly, they want their team to win consistently. Every once in a while, though, things are a little more entertaining when controversy creeps in. That’s when Scott might struggle with his composure, which brings a new level of suspense to things. It’s something to anticipate once we get November behind us.