The Nina, The Pinta and the Wilkes Barre 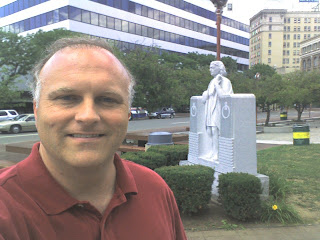 It's Columbus Day, something I typically would not notice. However, my random encounter with a Christopher Columbus statue in central Pennsylvania earlier this year has brought me international acclaim!
Well, that's a bit of a stretch. I got a random e-mail from a man named Peter van der Krogt who somehow had stumbled across my silly cell phone photo on the internet. Peter asked permission to use the picture on his website dedicated to Christopher Columbus monuments. Apparently Peter had no idea Columbus was honored in Wilkes Barre. How could he know? Clicking around Peter's page, it's easy to see how his hobby became a fascination, perhaps even a quest. One of the great explorers in history obviously is revered the world over, particularly in Portugal, Spain and the Americas. This means that Peter and his agents can travel far and wide photographing monuments honoring Ferdinand and Isabella's fair haired boy. Peter apparently goes on holiday a lot, which I envy. In his travels around the globe and on the web, he has discovered more than 400 Columbus monuments. He has solicited contributors, Columbus stringers if you will. I am proud to be in that number. In fact, he gave me credit and even linked to my Flickr photo stream. That and 95 cents will get me a Diet Coke in the cafeteria, but it's all about the Columbus brotherhood. 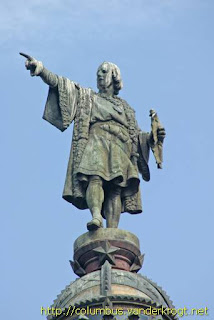 Of course, Big Chris in the Big Man for Peter. So, he posted the photo of the Pennsylvania monument and cropped me right out of it. I wouldn't expect anything else.
I find it immenseley amusing that he's getting photos from places like Barcelona while I'm unwittingly helping him from Wilkes Barre. Maybe I need to re-think my holidays. Happy Columbus Day!