Lately, my workdays have been spent mostly at a retirement community. This means most of my conversations have been with people in their 80's and 90's. One of my tasks has been to manage the installation of a big-screen, high definition television in a community room. Explaining the concept of HD to these remarkable people was something of a challenge. When the TV finally was turned on, the questions shifted from "What is High Definition?" to "How can I get that at my house?" in less time than it takes to attach tennis balls to the bottom of a walker.
I'm finding joyful moments in small things. For instance, I spent almost an hour with a man in a scooter who sat transfixed watching some workmen clear land nearby.
The process was kind of hypnotic and he was riveted. 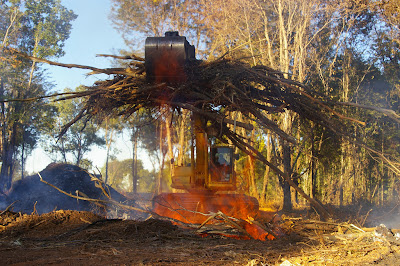 Finally, he opened up and told a story about taking 15 months to clear some land he once owned. He was younger, physically strong and learned how to work heavy equipment. He was wistful, but smiling all the while. 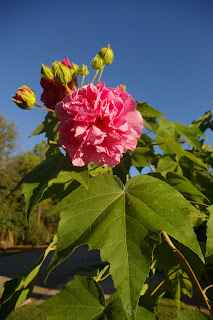 Later, a lady came by and offered a flower to me. She told me it was a Confederate rose, which she has been carefully cultivating in her yard. It is with great pride that she shared the product of her devotion, and it appears she will soon have much more to share.

The day ended with a wine and cheese reception to toast an exhibit by noted Shreveport photographer Fletcher Thorne-Thompsen. Many people visited with the affable world traveler and admired his work. Someone even won a framed print. It was fun to watch the silver hair set enjoy a cabernet or two. Once they paid proper homage to the photographer and his work, much of the talk turned inevitably to last Saturday's classic LSU-Florida football game...which many of them had watched on their brand new high definition TV. 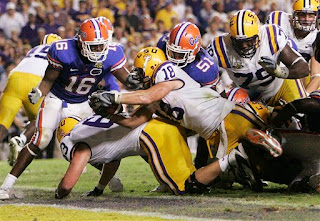 Maybe the next step is to combine the wine & cheese with the football. Now, that's retirement!