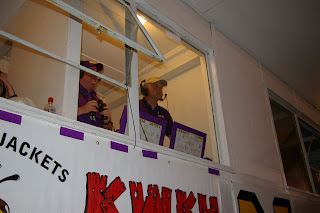 (Monroe, LA)- Being a freelance, part-time broadcaster can be a lot of fun. Calling games one or two days a week is a far cry from the daily grind of generating daily sporscasts. For the better part of three decades, I have taken pride in being essentially objective. In fact, as a home-team broadcaster for the last couple of years, I have upset a few players and a coach or two by "calling it as I see it." I have said more than once that I don't have "homer" cell in my body.
So, imagine my surprise when, during a tightly contested high school football game, I heard myself referring to referees, saying things like "These guys are just incompetent. I don't know who they are and I don't want to know. I hope when they see the post-game report, if they ever care to, they are embarrassed. Because they should be.
" 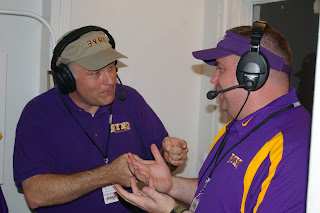 "Look at them out there: Dumb, Dumber and Dumbest staring at each other wide-eyed like deer in the headlights. They have no idea what's going on."
"During this time-out, can somebody please run down to the field and give these guys five dollars so they can buy a clue?" 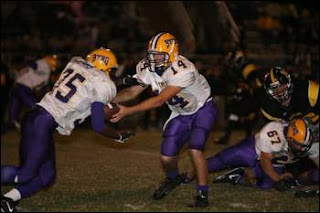 It's safe to say I got caught up in the emotion of the game (which our guys won, 17-16) and maybe I should be a little ashamed. Maybe I will be, but for now I'm not. I am standing by what I said to the head coach moments after the game's nail-biting conclusion, "I've been a sportscaster for almost thirty years and I'm telling you right now, that's the worst piece of s--t officiating I have ever &*%$ing seen." One of the assistant coaches high-fived me and said, "tell us how you really feel."
I'm just getting this off my chest, because I'm not ready to apologize. So, I will simply leave you with another line my voice spoke (I'm taking the position that I was having some kind of out-of-body experience): "The white cap threw the flag, and he did it with flourish. So, he obviously feels strongly about whatever infraction his swelled head imagined out there." Like I said, I'm glad I don't know those guys. I hope they don't know me. I will try to stuff Ugly Homer back into his corner in time for next week's game.