After suffering through an all-loser football weekend, the recovery process got off to a rousing Saturday start. LSU's ridiculous last-second win over Auburn was a wild way to wind up the day. The Tigers scored on a 22-yard pass play with one second showing on the clock to win by six points. 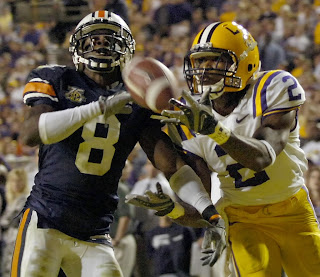 My wife and I watched the game with friends, something we don't do very often. I like to pay attention to the game in a way that is virtually impossible when you're surrounded by other people. The way the game unfolded brought out the inner child in some people. Imagine a successful business man in his fifties cursing and screaming at the top of his lungs. He is red-faced with alternating anguish and amazement at what he's witnessing on the plasma screen. That's what we had Saturday night. The thing is, I know there were many thousands of similar people across the state behaving similarly. That's what LSU football does to you.
If the Florida game two weeks ago was the greatest night in Tiger Stadium history, then you have to mention the Auburn win in the same breath. How can you not be a college football fan? 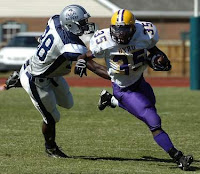 Earlier in the day, my daughter's high school team bounced back from last week's crushing loss with a thrilling three-point victory over a cross-town school. It was a sunny, windswept afternoon...a perfect way to pass some time on an October Saturday.
OH! and my wife's college team beat Steve Spurrier. There is hope that Vanderbilt may win its way into a bowl game. Yes, there are Vandy fans. They don't have a lot to cheer about, but they're around. 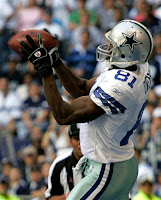 On top of that, the Cowboys bounced back from their loss to the Powerful Patriots with a come-from-behind victory over the Minnesota Vikings.
Plus, the Saints got a bruising performance from high profile running back Reggie Bush to beat Atlanta. The Saints have won two straight games after starting the season 0-4. 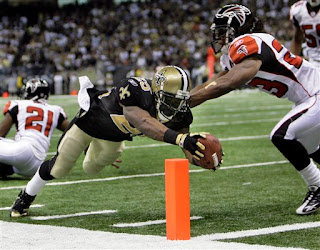 So, we're feeling a lot better about life these days. Two weeks until LSU collides with Nick Saban.