There was a beautiful moment during tonight's broadcast on FOX of game two of the World Series. I was so moved by it that I took photos of my teevee screen: 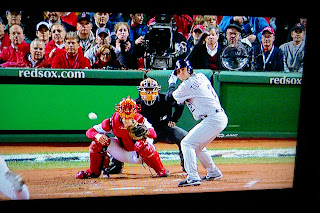 It's not what you see here that got my attention. It's what you don't see. For some reaason, all graphics disappeared from the screen. There was nothing there but baseball. 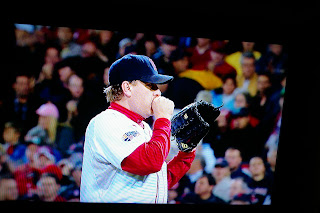 I know we can never go back. The networks have to brand the screen. The Attention Deficit Disorder crowd doesn't want to wait 30 seconds for the ball-strike count and the score to be put on the screen for ten seconds.
But, there it was, for a blissful minute and a half or so. Watching the game in HD with no graphics was like looking through a window.
My joy was short-lived in more than one way. earlier in the evening, I hosted a local radio show. I said this was a "strap-in Thursday." Not only is the World Series on, but there's a match-up of top 20 college football teams on ESPN. It's Thursday night, which means popular TV shows like "Grey's Anatomy" and "The Office" are airing. I made a comment that the man of the house would command the HD television for sports. This led to astonished text messaging from a couple of my buddies. I'll show them. 8:00 central time arrived, and look who's watching what on the big TV: 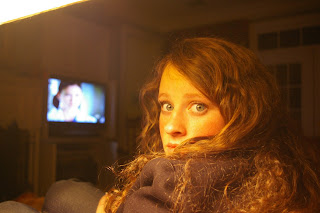 Virginia Tech and Boston College look really good on a little TV in the kitchen. It's true: Less is more.