Coming Up for Air

Daddy D has had no stories to tell this week, because he is grieving. Only today am I beginning to recover from the Lost Football Weekend. In a ridiculous convergence of gridiron disappointment, a four-day football weekend left us battered and bloody.
My daughter's school has a fierce rival. Their nickname is the Gators, and game week is seriously intense. The kids at her school dress in camo gear the day of the game. Parents actually cook gator gumbo. The principal is reported to have said, during a pep rally, "This school is about academics every other day of the year. Today, we are about just one thing: Beat those Gators!" 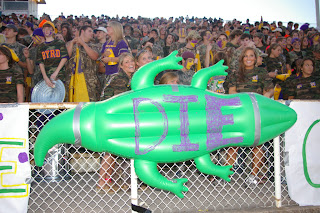 Coincidentally, I am on the announce team for this school's radio broadcasts. Despite all that school spirit, the Gators snapped a 12-year losing streak to our Yellow Jackets. Times were tough. 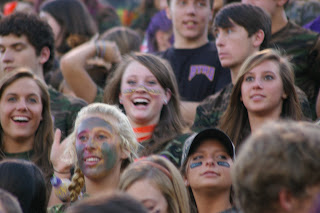 The kids in camo persevered, though. After all, the Jackets are 12-1 against the Gators over the last 13 years. 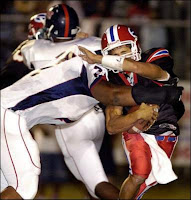 Friday, my daughter went to another school's football game. She had a date Saturday night with the quarterback. This was a rare opportunity to watch him play. Things did not go well. They played a powerful team from a higher classification and my daughter's friend took a pounding. They lost.
Then, there was Saturday. People looked at me like I was crazy when I said back in August that Kentucky was the LSU opponent which worried me the most. The game was situated between Florida and Auburn. It was in Lexington, where LSU seems to struggle. Plus, Kentucky is a lot better than people think..

Naturally, LSU lost. It was a triple overtime loss, but a loss nonetheless. Even though I saw it coming, I took it hard. The only salve for the emotional abrasion is the fact that they fell just to #4 in the rankings which count the most. There's still hope they will play for a national championship. They just need to win and that will take care of itself.
Finally, Sunday came. I had no real expectation that the Cowboys would beat the Patriots. New Englad is a juggernaut. They have a goal of being undefeated. I just didn't think the game would be as one-sided as it turned out to be.

It's the NFL after all, and a loss is just a bump in the road. If this defeat stood alone, I wouldn't give it much thought. As salt in the football wound, though, it really stung.
I don't have any insightful analysis about all of this, except to say I think I have finally found a way to be a fan. After spending all of my adult life forced into an objective corner, it's nice to allow myself to care; except it's a lot more fun when at least one of my teams wins. The upcoming weekend has to be better.

With time, healing and udnerstanding will come.

Until then, might I suggest large doses of Ben & Jerry's.