This is apparently the web sensation that’s sweeping the nation. Someone decided to steal this idea from this other person, then it became something of a meme and Workman got tagged, then he tagged me. (Is that clear enough?)
What you do is list things about which you are suspicious, then tag someone else. There isn’t much else to it, no minimum number of suspect things, no explanations required.
Speaking of stealing, the entire set-up above is a blatant theft from Matthew, who deserves it for forcing me into this whole thing. He had to explain memes and tags to me. So, if you get it, More Power To You.
This reminds me of the time my friend Steve sent me a basketball shirt and asked me to send shirts out to five people. They were supposed to follow in kind, and I was going to get hundreds of shirts. I hope Steve got some, because I wound up minus four shirts when the whole thing netted out.
That's a long way to go to say that I suspect Matthew's little meme-tag suspicionfest will come to a screeching halt right here. I have been challenged, however. So, here goes:

I am suspicious of:

A) People who tell you that unpleasant things are being said about you "because you deserve to know." A while back a friend of mine cautioned me to "beware the messenger." This is outstanding advice.

B) Anything teenagers say. They will lie at you as easily as they will look at you. They will tell you they woke up at 8:15 when they really woke up at 8:00, just because distorting the truth gives them a feeling of power and a misguided teenage sense of freedom.

C) Parents of teenagers who believe their children are well-behaved and obeying all the house rules. For more information, see Suspicion B. Here and now, I'm going to "out" my perfect cousin Alicia, who barely knows I'm alive. When we were 16, I went out with her and some of her friends. She, of course, was a perfect child. That night, she told her parents what was and remains to this day the most preposterous, lengthy, detailed lie I have ever knowingly witnessed. I wonder if they have figured her out yet.

D) Local politicians. There are some good ones, I just know it. However, for all the talk of fixing the potholes and attracting new business, there is always a self-serving undercurrent. Our job is to find the sincere ones and elect them.

E) Voters. See Suspicion D. I'm guilty of this myself: I just don't pay attention to what the candidates are saying during the campaign. I'll read a synopsis on-line or in the local paper a couple of days before the election. I think my standard of preparation for the election is higher than about 90% of the people out there, so there's not much we can do about the self-serving politicians.

F) Prime Rib. Really? How do you know? You're paying for prime rib. The menu says it's prime rib. I'm guessing it's somewhere between pot roast and Choice Cut. Enough au jus and horseradish, and it just doesn't matter. I knew a guy named Dean Rock who said he can't tell the difference between a filet and Steak-umm's. I think that's a strength for Dean. I'm also suspicious that Dean Rock is his real name, but that's another story. 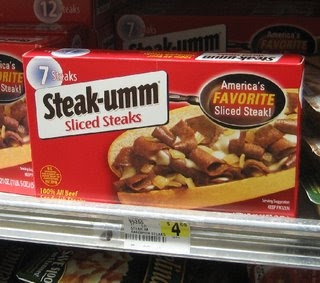 Okay. I've done my job. Now, I have to tag/ challenge others. Since this blog has approximately two dozen readers, almost none of them other bloggers, this is a tough one.
I challenge:

1. Bastian, who I have never met and will be shocked by this. But, she recently blogged about Steak-umms, and that's good enough for me.

2. Elizabeth Pryor, who reads Daddy D and has her own blog and has been suspicious since I knew her in high school.

3. Kathryn Usher, notorious for her suspicious leanings. She comes by this quite understandably. Her father was (I couldn't possibly make this up) a referee for Professional Wrestling.

4. Linnea, because she has spent time in the local media AND in the pageant circus AND in entertainment circles. She is a lovely talented person, but how can she not be suspicious?

5. Teddy! Because I can't tag Linnea and not tag Teddy. But mostly because, if Teddy participates this whole thing will be worth it because what he writes will be brilliant and hysterical.

6. I'd like to tag Trudeau, but his blogs carve suchnarrow niches that I have no confidence he would play along.

There, Workman. I did it. I'm going with you to the Faroes. And if anybody communicates with Dean Rock, tell him I said hello and next time I see him, I'll buy him a T-Bone...or some Steak-umms.

and I consider myself tagged...

You're free to come to the Faroes, I hear they're lovely.