Crawfish or Crayfish? You Decide 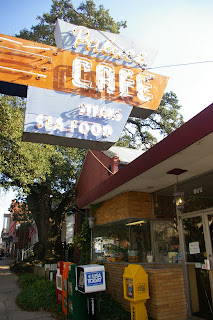 (Metairie, LA) - This week's Adventure in Eating brings us back to south Louisiana. On the way to this New Orleans suburb, I stopped in historic downtown Opelousas, Louisiana for lunch at the landmark Palace Cafe, where daily lunch specials tempt your tastebuds. I've spent almost five decades in Louisiana, and I've never heard anyone call our favorite crustaceans "crayfish." That is a decidely Northern word. Yet, the Palace Cafe is prominently offering crayfish bisque. 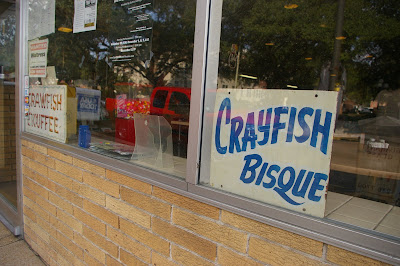 In the same window, they tout the more familiarly named crawfish etouffee. I was so confused, I went with a catfish po-boy, which was excellent. Two other guys from Shreveport were having lunch in Paradise, and they said the etouffee was the best they've ever had. Not knowing exactly what "crayfish" is, they stayed away from the bisque. 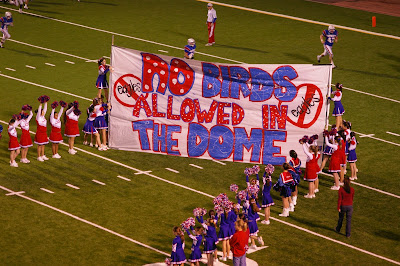 Tonight's football game featured two of the best programs in the state. John Curtis and Evangel Christian have 32 state championships between them, but this was the first time they had ever collided in the playoffs.

The Evangel Eagles of Shreveport lost 29-10. My daughter's friend the quarterback was under siege all night long.
It was nice calling a game involving a hometown team. I saw a lot of people I
know, including some members of the local media. A local sportswriter was fascinated by the difference in size between me and my broadcast partner Ronnie Rantz. Ronnie stands somewhere north of 6 foot 5. So, in order to look reasonably balanced on TV, I was standing on a coke crate. I was originally on two crates, but Ronnie isn't used to having to look up at people, so we brought it down a notch. 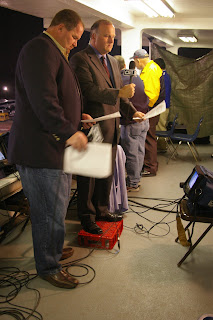 This was a source of immense amusement for a my buddy Roy, who started snapping pictures of my little booster and sending them to mutual friends on his cell phone. Hey, whatever works.
This was my last assignment of the season for Cox Sports Television. The road has been long and I'm a little tired, but I will defintely miss it. 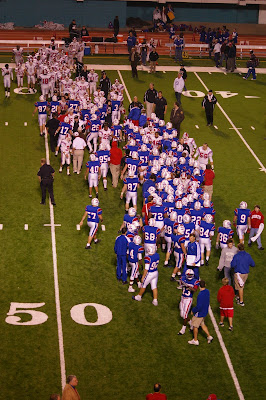