It Was a Heck Of A Ball Game

(Metairie, LA) - I saw a quarterback make a critical mistake at a terrible time tonight. HIs team trailing by six with 19 seconds left in the game...he brought them to the line of scrimmage on 3rd and goal from the five yard line. He had no time outs left. He didn't throw into the end zone. He didn't run out of bounds. He ran up the middle and was stopped at the four. 4th and goal, clock rolling. He rushes his team up to the line of scimmage...and SPIKES THE BALL! Incomplete pass. Ball game over. He loses by six in his final high school game.
High drama and heartbreak sufficiently chronicled, I headed back to a hotel room alone. 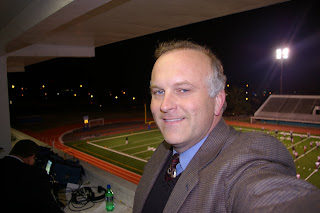 Being a mercenary sportscaster is a peculiar experience. I enjoy dabbling in television. Doing play-by-play is a significantly different experience from being a local anchor, as I was for a quarter-century. As it goes now, I'm the only import working on this crew. So, after the games, people just go home. They're all very nice to me. They treat me with respect and keeping hiring me, so I must be doing okay; but I haven't made any friends yet. 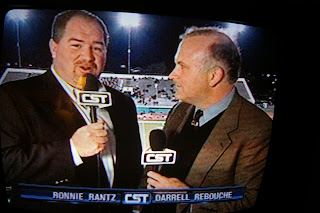 Typically, I drive across the state, call the game, spend the night and drive right back home. I'm really learning to lean on books on CD for company. Maybe one of these lost and lonely nights, they'll schedule a broadcast from north Louisiana. I'll take everybody out for beer after the game.