The Pictures Tell a Story

I'm guessing most people just don't think much about the fact that their parents had lives before they came along. There's also the idea that, even while you're around, Mom and Dad are real people with activities which don't revolve around you. I spent a little time poking around some of my father's scrap books and stumbled across a picture of my mother and my best friend's mother from A Long Time Ago. Both ladies have passed away, so I can't ask about this photo. They're young and trying to look glamourous..... 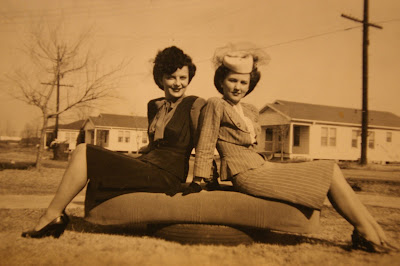 Perhaps they succeeded, but the setting leaves a little something to be desired. They seem to be sitting on a big sofa cushion which is elevated by a tire! The utility poles and the palatial mansions behind them also seem a little inconsistent with their sartorial splendor. The more I stare at it, the more I just laugh. I'm sure they had a fabulous time, whatever they were up to.
Then, there was this inspiring photo of my father lathering up: 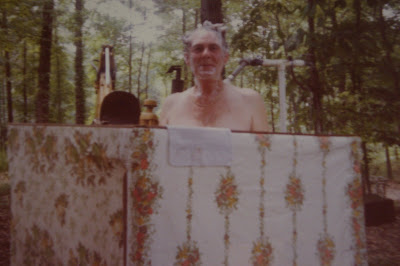 Whatever compelled him to construct an outdoor shower? He's still around to answer the question, but I'm not so sure I want to ask. Knowing him, it was all good, clean fun. He owned his own business and was able to retire at 55. He was able to accomplish this largely because he did a lot of the hard outdoor work himself. One of his most prized possessions to this day is his backhoe. (Look behind him to his right in the above photo.) Working on that big yellow beast is therapy for him. He comes alive when he fires it up. It's really amazing to see. 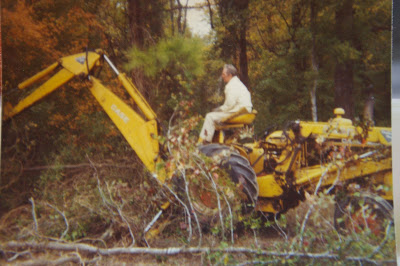 The backhoe fed me well, put a nice roof over my head and sent me to Catholic school for twelve years, so it's a family jewel.
My father worked hard for a lot of years, in the weather. He would sweat and freeze and get dirty. He always said he would never ask any of his employees to do anything he hadn't done, because he had done every dirty, disgusting job that might come up in a day's work. They saw it for themselves. I worked several summers for him and his brand of work inspired me to go to college. 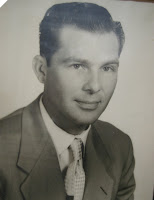 When it was time to relax, though, He certainly knew how. He could clean up really well and, I'm told, party with the best. Who knows? Maybe that's the inside joke of the couch cushion and the tire. Again, I'm afraid to ask.
He can also relax casually. His favorite place is a porch. At some point of any day, he is likely to find his way to one. If there's good company there, then all the better. 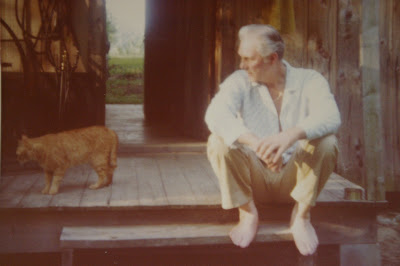