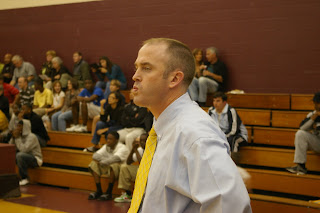 One of the most consistently successful local basketball coaches operates in relative obscurity. Chad McDowell, the head coach at LSU-Shreveport, is a winner. He has proven it time and again, and it’s time people took notice. At the start of his fifth season as the Pilots’ head coach, McDowell already has more than 100 wins to his credit, and a couple of the most noteworthy victories don’t even show up in the statistics. In November of this year, his NAIA squad won exhibition games over NCAA opponents McNeese State and Centenary. Make no mistake about it; exhibition status notwithstanding, those victories are attention grabbers. The Pilots have won 76% of their games since the program was resurrected in 2003, and 88% of their games in LSUS’s basketball facility, nicknamed “The Dock.” McDowell’s ship has come in thanks to his ability to attract NCAA-caliber talent to his rising tide program. One of his brightest stars was Fredericko Payne, who led the NAIA in scoring two seasons ago. Payne scored an average of 25.5 points per game and was selected as the first All-American in LSUS history. Payne was the Gulf Coast Athletic Conference Player of the Year in 2005 and 2006. He was named the Louisiana Small College player of the year in 2004, 2005, and 2006.

This season, McDowell’s emotional leader is Josh Porter, who missed most of the 2006-2007 season after breaking two vertebrae during a game. There was legitimate concern at the time that Porter may be paralyzed. There was fear that his life may have been in jeopardy. A year removed from those horrific moments, Porter has made a full recovery and is playing one more season for Coach McDowell.
The Coach creates the kind of atmosphere that draws players to his program. 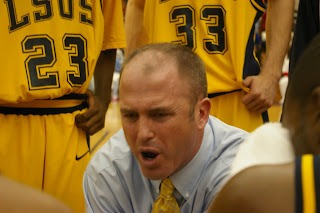 He did it at Byrd High School, his first head coaching assignment. His teams won 86 games in four years. He moved to his alma mater, Southwood High, and took the team to the 5A state championship game in 2001. In two seasons leading the Cowboys, he notched 67 wins while losing just 10 games. Then, the opportunity to coach at the college level presented itself. Five years later, his list of accomplishments includes GCAC championships in 2005 and 2006, back-to-back GCAC Tournament titles; three consecutive NAIA National Tournament appearances, two GCAC Coach of the Year Awards (2004 and 2005) and four Louisiana Small College Coach of the Year Awards (2004-2007). In 2006, the Pilots rose to No. 1 in the nation in the NAIA rankings.
He has done all of this while deflecting attention away from himself. His coaching style generates a fast-paced, breathless brand of basketball that is as entertaining to watch as it is effective. Catch the Chad McDowell Show at The Dock while you have the chance. The way things are going, he may be piloting a much larger program before you even realize he was here.