My Daughter the Thespian 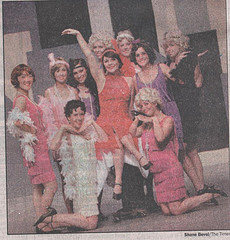 One of the disembodied heads in this photo scanned in from the local newspaper belongs to my daughter. She is heavily active in the Academy of Children's Theater, and they're getting a lot of advance publicity for their production of "Thoroughly Modern Mille," which opens this weekend in a downtown Shreveport theater. These kids have been putting in preposterous hours in rehearsal. Last night they were at the theater until well after 10:00pm. They were required to be back at 4:45 this morning to perform live on KTBS's morning show. The kids, high school and middle school age, have been working their little tails off and it's really paying off.
I have seen a lot of high school productions in my day. In fact, I was a drama club officer in high school. I've been around some amateur and community theater and 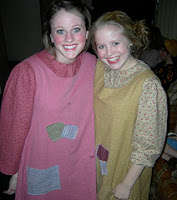 I'm here to say this is the best I've ever seen. They've put in so much time as they prepare for final exams in school that some of them are feeling ill. If they can get past that, this will be one of the finest musical productions our little city has seen. 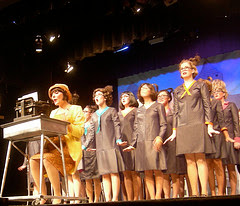 It's that good. My daughter played "Pepper" in the fall production of "Annie" and is "Ruth" in the current production. Both are speaking parts, but not starring roles. So, I can maintain a reasonable level of observational objectivity.
In the fall, ACT's "Annie" played to critical and popular acclaim. "Millie" blows Annie away.
People are noticing. This news broke on opening night:
Due to strong ticket sales, the Academy of Children’s Theatre has added a matinee performance to its production of “Thoroughly Modern Millie.” The new show is at 2 p.m. Sunday.

Other scheduled performances are 7 p.m. tonight, Friday and Saturday and 7 p.m. May 10-12.