I Won A Tee Shirt From Teddy 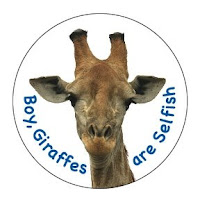 There's a lot of useless knowledge stuck in my brain, no doubt a product of wasted time. I was using my time productively and checked out the blog being maintained by Teddy Allen From the Newspaper. There, Teddy challenges his readers to explain the origin of a reference to Giraffes being selfish. This was obvious to me. Everyone who loves the Andy Griffith Show knows that Giraffes are selfish. Teddy was offering a free tee shirt to anyone who could properly explain how this came to be known.
I wrote to Teddy and explained that there was an episode where Opie had to let some stray dogs go on a farm. As I recall, there were storms coming, and he was worried about how they would do. Barney explained that dogs are too low to the ground to get struck by lightning, then said something like "Now, if there were giraffes out there, we'd be in trouble." Barney goes on about how the dogs will help each other, but not giraffes. "Boy, giraffes are selfish, just run around looking out for number one, getting hit by lightning...."
Then, thunder claps and Barney leaves the courthouse to go save the dogs....


When my wife was pregnant with our daughter, we visited the National Zoo in Washington, DC. While we were there, a baby giraffe was born. We have photos of it, and all. So, in the gift shop, we bought a stuffed-toy giraffe for Future Baby.
Fast forward about four years: my mother-in-law takes our daughter to the Acadiana Zoo where she hand feeds a full-grown giraffe. The photo is so cool that we have it blown up to poster size. 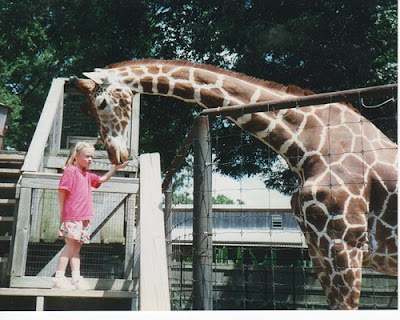 All that being said, I have to admit that giraffes ARE selfish, always
running around looking out for themselves, getting struck by lightning. They're not at all like dogs, which are well insulated by fur and low tothe ground, but still watch out for each other.
Teddy wrote back, promising to send that tee shirt to me because, as he said, "Unlike giraffes, I try never to be selfish."
It is a proud, proud day.
Further evidence that giraffes are, indeed, selfish: Two more photos of my daughter visiting the same giraffe on different occasions. As you can see, the giraffe, selfishly, is always demanding food. 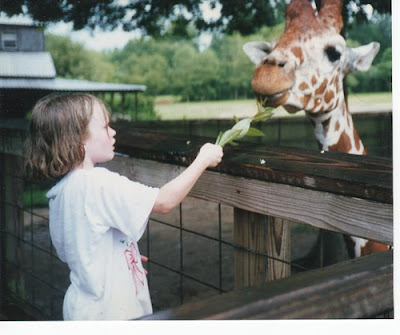 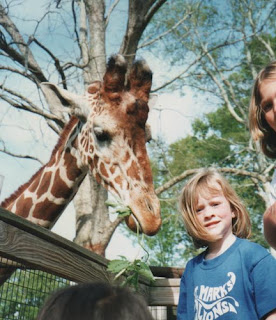 Where does this poster size picture hang? It's my theory that you can't hang really BIG pictures of kids or family unless you're a grandparent.

It hangs in the stairwell after a nice long run in my daughter's room. I'm efforting the original from my in-laws to post. The poster-size photo is too big for the scanner. If it shows up in the post, you'll know I was successful. I mean, it's true: some things do speak for themselves.

Awesome pic! I'll have to re-think my "big pictures are for grandparents only" theory.

Your daughter is so brave! Look at the size of those giraffe lips. Scary!