It appears there has been an epiphany at Louisiana Tech. The great folks in Ruston have come to grips with the fact that their athletic department has retreated into a morass of mediocrity and they aim to change things. “In many ways our athletic program is at a critical juncture,” offers long-time tech Athletic Director Jim Oakes. “We have tremendous potential to advance Tech Athletics like never before.”

The Tech campus is one of the kindest patches of Earth around and that has been reflected in the hiring processes. Head coaching vacancies often have been filled from within. Oakes has

gone against the grain by hiring Derek Dooley to lead the football team and Kerry Rupp to coach men’s basketball. Oakes is their biggest cheerleader, “Derek Dooley and Kerry Rupp are intelligent, committed to building strong leadership programs, and perfect fits for our school.” he said.

The fit is made more comfortable by the fact that the hires have the blessing of Tech’s two most successful athletic alumni, Terry Bradshaw and Karl Malone. Bradshaw, and NFL Hall of Famer with four Super Bowl rings, recently visited the campus and said he likes what he sees from Coach Dooley. Malone, one of the greatest NBA players ever, steered Rupp toward Ruston and is expected to become heavily involved in the basketball program. The mere mention of their names can give Tech a recruiting advantage.

Dooley, who was on Nick Saban’s staff at LSU and with the Miami Dolphins, replaces Jack Bicknell III, an extraordinarily likeable man who was popular among the Tech faithful. Removing Bicknell was hard on Oakes, who says “change is a constant in college athletics like most other pursuits. We want to push the envelope - be innovators with all of our sports. That is why change is sometimes inevitable.” Rupp takes the place of Keith Richard, who ruffled a few Ruston feathers on the way to 150 wins and 117 losses over nine seasons. Rupp comes to Louisiana Tech with impressive credentials after serving as the associate head coach under Mike Davis at Indiana and then at Alabama-Birmingham. Notably, he also was an assistant coach and recruiting coordinator for Rick Majerus at Utah and as interim coach in 2004, led the Utes to a conference title.

Getting fans to attend games in significant numbers continues to be a challenge. Oakes knows winning consistently will help, and he hopes the new hires have people’s attention. “We have quality coaches in place. This has created a real buzz among Tech fans,” Oakes asserts with his legendary optimism. 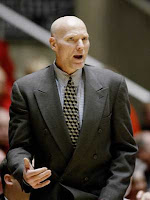 No doubt he will preach patience while people buzz about, because rebuilding takes time. It also takes money in the form of donations and ticket sales. Tech will continue to compete in the geographically challenging Western Athletic Conference. Oakes is attempting to rally the troops, saying “Now we must generate more support from our fan and alumni base in order to compete fairly with conference partners with much larger budgets. Simply put, we must invest for success and all indications are that Tech folks are ready to do just that.”

An investment in success is clearly indicated by the resumes of the two new coaches. The next step is for Oakes and the rest to find a way to convince the rest of north Louisiana to emotionally invest in Tech athletics. Change is constant, says Oakes. He says change is inevitable. Maybe he’s right. Maybe people will change their attitude about the Bulldogs and start paying attention.
Sphere: Related Content