After suffering through the Masters over the weekend, I was relieved finally to see some birdies on TV Monday night. Close observers may have noticed I have cultivated a little interest in Arena football. So, I actually was watching the Monday night version on ESPN2. I wasn't grinding it, or anything. I just had it on. The Philadelphia Soul was hosting the Georgia Force.

The Soul is owned by "rocker" Jon Bon Jovi, who was watching with interest from a luxury suite when Georgia scored a controversial touchdown. As the refereee explained the ruling, the director took the inevitable shot of the famous owner looking on in disgust. Then, we saw this: 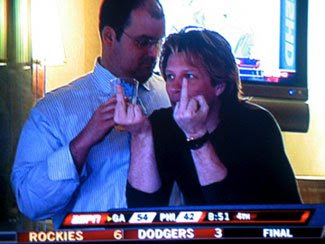 To Bon Jovi's credit, I suppose, he brought it up after the game before anyone had a chance to ask him about it. Talking about the play in which a Georgia reciever caught the ball, dropped it, then played it off the wall and was awarded a touchdown, he said, "I didn't understand the ruling. (The Georgia player) did have possession on the play. He fumbled in the end zone. He recovered the ball. I reacted to something I didn't know the rule on."*
Bon Jovi said he obviously didn't realize he was being shown on TV when his gesture flew the coop. "I apologize for the middle-finger thing," he said. "I didn't understand the rule. It's simple as that. We will be back next week."* The Soul siffered its first loss of the season.
The owner will be back, too. Apparently, he will get in no trouble from the league for this. It all has a benefit. This is getting some national attention, and people who didn't even know Philadelphia had an Arena team, not to mention that Bon Jovi owns it, are paying attention.
Given the majesty of JBJ's birds, maybe he can buy an ownership stake in the Eagles.
*quotes from the Philadelphia Inquirer
Sphere: Related Content