Former Dallas Cowboys quarterback Quincy Carter makes no secret about his desire to get back to the NFL. One of the first steps on his journey is to learn the Arena game, and he's doing that in Bossier City. Carter and his new team, the Battle Wings, played their first 2007 game Saturday night, defeating the Ft. Wayne Fusion. 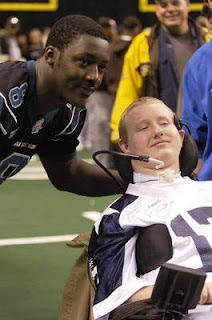 Carter might have gone big-time on his new teammates, but he hasn't done it. The overwhelming majority of the time, he has treated the people he has encountered around town with patience and kindness. After Saturday's game, Carter and the rest of the players came back onto the field to mingle with fans and sign autographs. One fan got Carter's attention. He was wearing a Dallas Cowboys #17 jersey, a Quincy Carter replica. When carter saw this fan, who is confined to a wheelchair, he stopped everything he was doing, worked his way through the crowd and engaged the fan. He signed autographs and posed for photos with him.
If Carter plays well enough, he just might get a call this summer to report to an NFL camp. As we have said before, if Carter is a one-year wonder in Bossier City, everybody wins. Saturday was a big night for Carter. He led his team to a victory, proved he can still play and lead, and he made a direct positive impact on one of his devoted fans. Winning begins one victory at a time.
Sphere: Related Content