Time for a New Car!

Three Caddo Magnet High School students were taken to a local hospital this morning following a three-car accident on Youree Drive at East Herndon.
How many times have we read a lead sentence like that? It takes on a different feeling when one of those students is your son. What a way to start the day, with a phone call that my 17-year-old's car has been crushed from the rear, and that he was pushed into another car.
He will be okay, but tomorrow he probably will feel worse than he does today. He was stopped behind other cars, preparing to turn left about two blocks away from school when he got blasted. 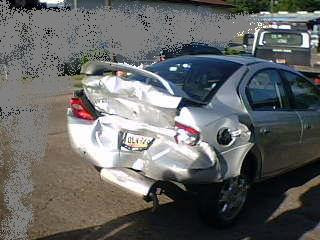 There were no squeals and no skid marks, which tells us that the 65-year-old driver whose car collided with his did not apply her brakes. She told police she doesn't know what happened or why she didn't see the cars stopped in the road.
My son's passenger needed a few stitches, but both boys are alright thanks to their seatbelts. Believe it or not, my son is a seatbelt militant. Today, his insistence really paid off. He has a bruise from the shoulder harness, but he didn't hit the steering wheel or the windshield, and that's a tremendous break. The girl driving the third car was treated and released.
The car is done. The body shop guy took one look at it and told me what I already knew: "It's totaled." I had to explain that concept to my son, that it would cost more to repair it than it's worth. He said he will be okay as long as he can get his stereo out. Maybe we'll get him a new stereo in his new car. Maybe he can get excited about getting a new car. Maybe I can get past the financial shock of shelling out the difference between what we buy and what the insurance company pays us.
That's another process I'm dreading. The adjuster at Kemper, the company which insures the lady who caused the accident, has been proactive about helping us. She's being friendly, but I'm cynical enough to think that's part of her training. If she's nice to us, maybe we won't get bent out of shape a threaten a lawsuit. I'm not inclined to call any of those TV lawyers, anyway. I'll be interested to see if anyone in the legal profession tries to contact us. That's not our way, but I am expecting Kemper to treat us fairly. How do you define that? We will see how the kids feel in a few days.
It's good to dwell on the positive. Nobody's life has been in danger. There are some bumps bruises, cuts and some significantly sore muscles, but everyone will be okay. For that, we all are grateful.