Is God a Baseball Fan? 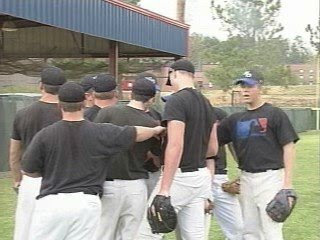 KNOE television in Monroe, LA did a story on March 21st about the West Ouachita High School baseball team. The coach has pratice on Wednesdays and the junior varsity team has five Wednesday night games. Why is this worth a news story? Because a youth minister at a local Baptist church is worked up about it. In a story reported by KNOE's Mike McDaniel, Clark Springs Baptist Church youth minster Mike Israel complains, "It's very easy to fall off and quit coming to church or get out of the habit and I think that a conflict like this would easily take a kid out of the habit. I just don't feel like they ought to have to compete with baseball."

The baseball coach, Mitch Thomas, took a conciliatory tone, saying, "I've told these kids from day one, you know, our list of priorities is their religion, their family, their education and then baseball." Really? The coach and his athletic director have said that any player who misses a game or a practice for church will be excused. Lets get real here. Maybe it's excused, but there will be consequences. There are five games on the school's schedule planned for Wednesday night. Any player who misses five games, for whatever reason, will find plenty of time on the pine. More correctly stated, a player who shows up for all of his team's games absolutely should get more consideration for playing time than one who does not. What is the big deal, anyway? This is Wednesday, not Sunday. It's a tough sell to say a kid who misses five mid-week prayer meetings will go to hell or something.
What about the precedent that's being set here? If it's a prayer meeting, then why not the school play? If a kid wants to go to rehearsal instead of baseball practice or a game, then under the Mitch Thomas plan, he should be allowed to without repercussions. Typically, coaches do not make participation in games optional. It's just preposterous.
Let's be clear: West Ouachita is a public school. The baseball coach has inserted himself into a tight political wedge. He should set a standard: You commit to playing on this baseball team. You commit to contributing to this baseball team completely, or you don't play for this baseball team.
Back to the minister's point. Since when is attending church a habit? Doesn't habit have a negative connotation? Shouldn't the kids attend services because they're sincere or "on fire with the love of the Lord," or because they're exploring the very nature of their existence? Mr. Israel is doing the kids, the coaches and the community a real disservice. You can honor your commitments and show how much you love Jesus or your Baptist brethren while leading by example. Then, when you have done that, you go back to the church the next Wednesday and pray about it.
Sphere: Related Content