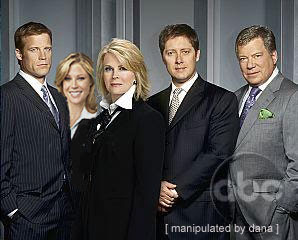 We love to watch "Boston Legal." We actually watched the show from which it spun off, "The Practice." While the original show was a straight, often dark, legal drama; BL has a significant comedic element to it. James Spader is the star, but William Shatner consistently steals the show with his portrayal of Denny Crane. Shatner's character is a lawyer who is suffering form dementia, not to mention a viper's nest of prejudice and judgmentalism. We are to believe that Crane was once an imposing, invincible litigator who now wins cases in spite of himself based largely on his reputation.

Tuesday night, the show's creators pulled off a trick that was fascinating to watch. During the episode, the son of a murder victim takes Crane and other lawyers, along with some clients, hostage. He has with him the man who was tried for his mother's murder. He demands a new, mock-trial. We are told that the accused murderer was Crane's first client, and that he presented the case with his father. There are flashbacks to Crane debating the case's merits and the guilt or innocence of the client with his father. 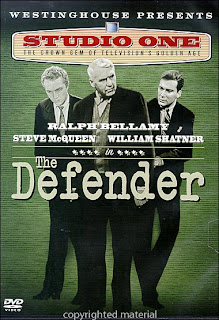 The actor in the black and white flashbacks looks remarkably like Shatner. That's because it is Shatner, about ten years before he became a star as Captain James T. Kirk on "Star Trek."
The show's producers took scenes from a two-part special called "The Defender," starring Steve McQueen as a man on trial for murder. He is defended by a father-son lawyer team played by Ralph Bellamy and William Shatner.
The Boston Legal people wove this old kinescope into the show in a fascinating way. It worked really well. For me, it was a "Gee whiz" moment, a "How'd they DO that?" kind of thing. A show which has consitently entertained me really impressed me tonight.

Did you watch Boston Legal in HD? I remember a few months ago you posted about getting HD...it's amazing, isn't it? One thing, though, do you have any idea why your old employer is not broadcasting HD over the air? Word is that the folks on Comcast get KTAL in HD but everyone else who uses OTA antennas get it in digital. Is that legal, for them to only give the HD signal to the paying cable folks and not those with antennas?

I do watch it in HD. The skyline shots on that show are beautiful. Same goes for the city shots on Grey's Anatomy.
The last time I checked with someone at KTAL, they still were battling problems at the transmitter. They have a direct fiber link to Shreveport cable. So, I guess they figure it's better to give HD service to some rather than none.
As a viewer, it is extremely frustrating to NOT have NBC in HD. I actually applied for a waiver from DirecTv, but of course the station denied permission.
They were hoping to be up in full-power HD before Thanksgiving. It's interesting that the GM stopped posting HD updates on their website. I know him and can tell you this frusrtates him, as well. I stopped calling and asking. I just turn on the digital channel every couple of days to check.