Wings Win Again - What a Thrill 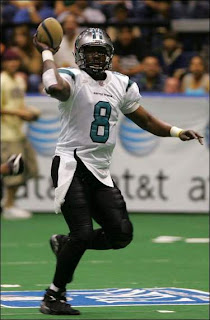 (Hidalgo, TX) – The Bossier Shreveport Battlewings scored with three seconds showing on the clock to remain undefeated on the young af2 season with a thrilling 52-48 win over the Rio Grande Valley Dorados.
The match-up of unbeaten af2 Southwest division teams was a rock and roll thrill ride, with teams swapping scores until the final seconds. On the Battlewings’ final offensive play, Quincy Carter hit PJ Winston in the end zone from 24 yards away to provide the margin of victory. It was the third touchdown catch of the night for Winston, who caught ten passes for 177 yards. Carter completed 27 of 42 attempts for 344 yards and seven touchdowns and was named the offensive player of the game for the third time in three games.
The Battlewings surrendered the ball on downs on their opening possession and quickly fell behind. Dorados quarterback Josh Kellett connected with Coco Blalock for a score and a 7-0 advantage. The Bossier-Shreveport offense was sluggish in the first quarter of their first road game of the season, managing just a 30-yard field goal from Brian Hazelwood.
In the second quarter, the Wings would claim their first lead. Carter hit Jamaal Perry from 16 yards out, capping a five play, 40-yard drive. Hazelwood’s Point After made the score 10-7.
The lead would change hands four times before the half. Carter’s 38-yard scoring pass to PJ Winston at 5:34 o the 2nd quarter made it 17-14. The Battlewings led 24-21 at the half following an eight-play 45 yard drive that culminated in a Carter to Perry scoring pass with five seconds showing on the clock.
The Dorados quickly regained the lead with the first possession of the second half when Josh Kellett and George Williams connected on a six-yard scoring play, which put a punctuation mark on an 8-play, 45 yard drive.
The Wings had a dramatic response: Carter to Manwell Talbert on the very next play. The 37-yard pitch and catch made the score 31-28 Battlewings.
The Battlewings appeared to be in trouble when, with less than four minutes remaining in the game, Carter fumbled the snap from center at his own 5 yard line. Keenan Williams of the Dorados picked up the loose ball and scampered into the end zone for a score that would give RGV a 41-38 advantage.
But Carter and Talbert comined for another one-play dandy, a 24-yard scoring toss on the next play. When the Dorados scored with less than a minute to go to take a 48-52 lead, the stage was set for Carter and Winston’s dramatic finish, a pass into the back right corner of the end zone which Winston hauled in with ease, bringing a boisterous Rio Grande Valley crowed to an eerie hush.
The Battlewings improve to 3-0. They will host the Laredo Lobos Friday night in Bossier City.