The Happy Couple Went to Prom 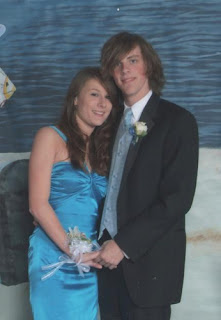 Is it just me, or is the Prom overrated? Prom night has some kind of legendary mystique to it, but does it ever really live up to the hype? I remember what my high school girlfriend wore to the prom, mainly becaue I looked at the photos for so long. I don't remember where the prom was, what we did afterward, who we had dinner with, or any other detail. It was an excuse to stay out late and go out to a fancy dinner, but that's about it.
Fast forward thirty years, and my son goes with his lovely long-standing girlfriend to the prom. They looked nice. They took some pictures. They stayed out essentially all night. I'm not sure what they did, and I guess that's what prom's all about, some kind of expression of freedom: damn the curfew, full speed ahead.
We took no phone calls from alarmed parents and no one was arrested or killed, so I suppose my son's prom was a success. He seemed underwhelemed by the whole thing. The Happy Couple keeps a low profile around us, anyway. I don't like that very much; but hey, they're 17. Who wants to hang around with the parents?
So, prom has come and gone with little fanfare. They're juniors, so they can do it again next year. Maybe they'll remember Prom '07 when Prom '08 rolls around. I suspect when Prom '37 gets here and they're paying for the tux rental, they won't recall a thing except maybe that baby-blue vest.

I completely agree that prom is the most overrated thing ever. It costs a bundle, and is significantly LESS fun than a normal date. If you figure out the dollar to fun ratio, it just makes no sense to attend.

I went to the junior prom because I sort-of had a girlfriend and attending seemed like the thing to do. So I rented the ill-fitting tux and sat through an endless set of photos with both sets of parents and eventually sat down to a dinner of chicken cordon bleu. It was an utterly forgetable night, and I would have had much more fun just hanging out with my friends.

So for my senior year, that's just what I did. I didn't bother with the prom and the polyester formal wear and limo rental. I just hung out with my friends. We may have seen a movie, but I don't recall what it was.

My parents really encouraged me to attend my senior prom. They seemed to think that I was robbing myself of my most precious teen memories. But with 20 years of hindsight, I'd say I made the right call.

On the other hand, it pays dividends years later. See the photo from Prom '77 posted above.