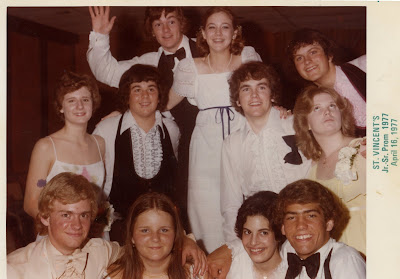 Only confirming that Prom is highly overrated, I offer evidence sent in by vigilant Daddy D reader Elizabeth Pryor. Here is indisputable evidence that I was with Elizabeth (top center) and many others at a prom in April of 1977. I remember almost every person in this photo, and I'm still in contact with two of them. That's me, young and with a lot of hair, top-right. It looks like I just stuck my head into the frame. Who was my date that night? I couldn't tell you. Maybe Elizabeth remembers. I remember the people, but I don't remember the night.
Don't think for a second that I was there without a date. That was another school's prom, which means I had to be invited by someone.
One of my closest friends from junior high and high school is in this picture. Regrettably, we haven't spoken in years, decades maybe. Another guy moved away for thirty years and just moved back to town late last year. Another moved from L.A. to New York in the early '90's and is raising a family in the Big Apple. One of the girls in the photo is the younger sister of a guy who went on to start at quarterback in a Super Bowl. Another guy ultimately married one of my wife's closest childhood friends, but they're divorced now and the ladies have lost touch with one another. The other guy, I haven't seen since high school. Two of the girls, I couldn't tell you who they are. Another girl I've lost touch with, but I see her brother about once a week. I'll have to ask how she's doing.
High school seems so important, and I'm sure it is. I have two kids going through it now. They're making memories, no question. You just wonder how long they will last.
As for Prom '77, I think we all look pretty good. Hey, we were wearing ruffles, but at least there's no powder blue vest! I say that while trembling in fear that someone will dig up the photos from Prom '78. I remember the girl (Heck, I'll never forget her) and I absolutely remember what I was wearing. There was a whole lot of blue involved.