My friend Tim refers to his spouse as "The Sports Wife." With all due respect to the sentiment, she's playing for second place.
Over the years, my wife has become accustomed to people recognizing her last name and associating it with sports. One day, she had a professional encounter with a young woman who said she had met me. My wife respnded politely and established that I had interviewed the lady's father a few times. She said her dad is a football coach. My wife remembers, "I was thinking Bossier High, something like that," when she asked the lady what her father's name is. She said "Lou Holtz."
This was in the late 80's, the year after Notre Dame and Coach Holtz had won the national championship. The conversation went on for a bit, and ultimately my wife asked the gold-standard question: "Can you get us some tickets?"
Less than a month later, an envelope showed up in my mailbox with a Sound Bend, Indiana return address. Inside was a letter with the heading "From the Desk of Lou Holtz." Also in there were six tickets to Notre Dame against Michigan State in Notre Dame Stadium, 30 yard line, halfway up. 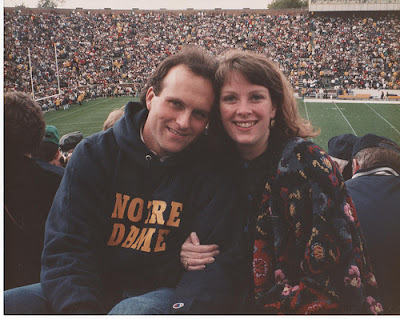 I got your sports wife right here.