It Was Twenty Years Ago Today 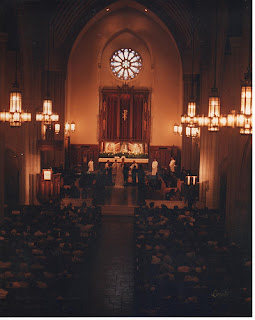 Our wedding turned out to be something of an event. Five hundred invitations were sent out, and from the looks of things most people came and brought people with them. I was blissfully oblivious, but apparently our ceremony sparked some controversy. My father-in-law is a priest and at the time he was the rector of a church in town, but we did not get married at his church. We got married at the church my wife attending growing up. (It's the church we still attend, by the way).
Diocesan politics being what they are, an effort was made to please everyone. The choir from my father-in-law's church came over and joined with the choir from our church to make a joyful noise onto the assembled masses. It was impressive, as I recall.

The bishop married us, and we had a monsignor on hand to provide a Roman blessing to the Anglican proceedings. My father-in-law, understandably, wanted simply to be the father of the bride. The parish priest was on the altar having helped coordinate everything.
There was a lot of clergy there, is what I’m saying. Naturally, this led to some ego wars. Everything went according to plan and the wedding guests knew nothing of the collared discord. Ultimately, the Christian men were just that and everyone got along. The sacrificial lamb was the choir director who dared to let some other kids play in his sandbox. I think Father Fred was displeased.
The end result, though, was a beautiful wedding which made my blushing bride and her mother proud. My mom described it as “a royal wedding,” which means she was pleased.
We went to the reception, and then kind of hung out with the out-of-town guests into the evening. It was a nice party. Some of the guys snuck into the kitchen a lot, because there was a TV in there and the Celtics were playing the Pistons in an epic NBA Eastern Conference finals series.
The wedding got written up in the local paper’s society section. The afternoon paper published a little feature about it. Like I said, it created a little local stir. My father-in-law’s words “It’s not about the wedding, it’s about the marriage” are absolutely correct and I’m grateful for the advice; but 20 years ago today, it was about the wedding, at least for a little while. 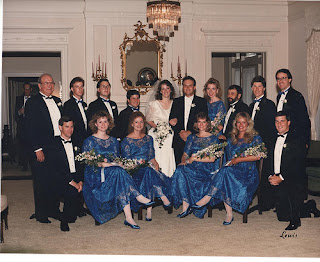 Congrats on the 20 years.

Two things: "collard discord" -funny!
An afternoon paper? Wow! Next thing you'll say is that you drove away from the church while listening to an 8-track tape.