You have to hand it to the Shreveport Sports. They’re hanging around. The baseball team occupying Fair Grounds Field has begun its fifth season, which is more than double the amount of time we endured the Swamp Dragons. The problem is, not too many people have noticed. Second-year general manager Terri Sipes says her biggest challenge is “letting people know we have a professional baseball team here in town.”

Sipes know a little about operating in near anonymity. She worked in the Captains’ organization in its fading years, when muggy nights at the ball park lost their Shreveport élan and were replaced by the cool cacophony of riverboat casinos. She believes baseball has a place here, that people just need to be reminded. She has augmented her sales force, which is hearing with some consistency that people simply don’t know about the Sports. So, they’re reaching out. “We haven’t had enough people out promoting the Sports,” Sipes admits. “That’s what we’re changing this year. We have a larger staff with five new people on board targeting groups and communities in the outlying area in Shreveport and Bossier. We’re targeting charitable organizations and presenting them with fundraising packages,” Sipes say hopefully, believing all the while that if people will just come to the ball park they will want to come back and bring their friends. The front office has a hometown feel. Another former Captains executive, Michael Beasley, has joined the fold as Vice President of Business Development. Dave Nitz, a broadcaster familiar to thousands of area fans as the voice of Louisiana Tech and the Captains, returns to call Sports games. They’re doing everything they can think of to make this feel familiar.
The stadium itself has become an issue. When LSU and Centenary played there earlier this year, the facility was in embarrassingly bad condition. Maintenance had been neglected by city crews and the scoreboard had fallen into disrepair to the point that it was illegible. Sipes insists those problems have been addressed, that the scoreboard is repaired and the stadium is “spruced up.” There was a lot of excitement when FGF opened, but believe it or not that was more than two decades ago. “It’s now in its 21st year of existence,” Sipes says as she ruefully does the math. “When it was built it was state of the art. We were about a year too early building this structure compared to what baseball owners are building now,” meaning that today’s minor league parks have more amenities and are like miniature big league facilities. The strengths Fair Ground Field boasted in the mid-80’s are still there, though. There’s not a bad seat in the house and fans can sit close enough to converse with the players. 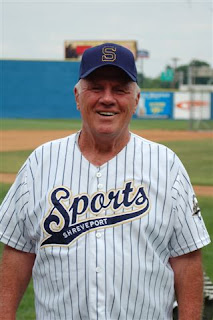 The product on the field seems to have had little impact on attendance. The team wins consistently and Sipes compares the caliber of play favorably to that of the Captains and the Swamp Dragons, saying “We’ve had several players who have played double-A ball. The caliber of play is pretty much equal.” Eleven players return from last year’s team, including star outfielder Chad Gambill and pitcher Bert Snow, who double as player-coaches. Manager Bob Flori is back for the third consecutive season. All of this is plays into the hope that familiarity will foster fan loyalty.
The season runs through August and everybody knows it will be hot. Sipes and her team hope that describes demand for tickets as well as the weather.